Joker is Cool But Not the New Popcorn Time

While BitTorrent’s underlying technology has remained mostly unchanged over the past decade, innovators have found new ways to make it more presentable. Torrent clients have developed greatly and private tracker systems such as What.cd’s Gazelle have shown that content can be enhanced with superior cataloging and indexing tools.

This is where Popcorn Time excelled when it debuted earlier this year. While it was the same old torrent content underneath, the presentation was streets ahead of anything seen before. With appetites whetted, enthused BitTorrent fans have been waiting for the next big thing ever since.

Recently news circulated of a new service which in several headlines yesterday was heralded as the new Popcorn Time. Joker.org is a web-based video service with super-clean presentation. It’s premise is straightforward – paste in a magnet link or upload a torrent file from your computer then sit back and enjoy the show.

Not only does Joker work, it does so with elegance. The interface is uncluttered and intuitive and the in-browser window can be expanded to full screen. Joker also provides options for automatically downloading subtitles or uploading your own, plus options for skipping around the video at will.

While these features are enough to please many visitors to the site, the big questions relate to what is going on under the hood.

Popcorn Time, if we’re forced to conduct a comparison, pulls its content from BitTorrent swarms in a way that any torrent client does. This means that the user’s IP address is visible both to the tracker and all related peers. So, has Joker successfully incorporated a torrent client into a web browser to enable live video streaming?

Last evening TF put that question to the people behind Joker who said they would answer “soon”. Hours later though and we’re still waiting so we’ll venture that the short answer is “no”.

Decentralized or centralized? That is the question..

The most obvious clues become evident when comparing the performance of popular and less popular torrents after they’ve been added to the Joker interface. The best seeded torrents not only tend to start immediately but also allow the user to quickly skip to later or earlier parts of the video. This suggests that the video content has been cached already and isn’t being pulled live and direct from peers in a torrent swarm.

Secondly, torrents with less seeds do not start instantly. We selected a relatively poorly seeded torrent of TPB AFK and had to wait for the Joker progress bar to wind its way to 100% before we could view the video. That took several minutes but then played super-smoothly, another indication that content is probably being cached. 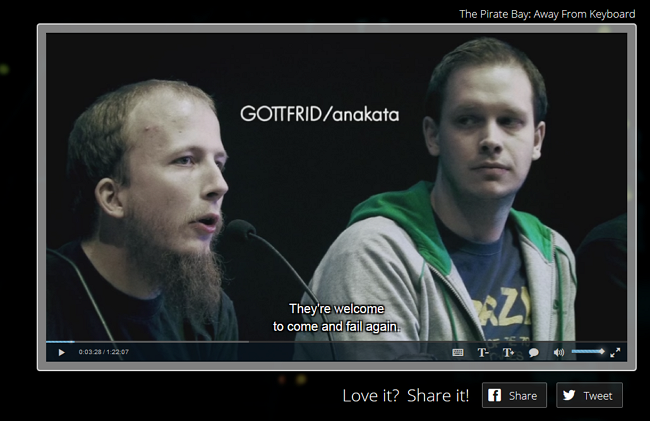 To be absolutely sure we’d already hooked up Wireshark to our test PC in advance of initiating the TPB AFK download. If we were pulling content from a swarm we might expect to see the IP addresses of our fellow peers sending us data. However, in their place were recurring IP addresses from blocks operated by the same UK ISP hosting the Joker website.

Joker is a nice website that does what it promises extremely well and to be fair to its creators they weren’t the ones making the Popcorn Time analogies. However, as a free service Joker faces a dilemma.

By caching video itself the site is bound by the usual bandwidth costs associated with functionally similar sites such as YouTube. While Joker provides greater flexibility (users can order it to fetch whichever content they like) it still has to pump video directly to users after grabbing it from torrent swarms. This costs money and at some point someone is going to have to pay.

In contrast, other than running the software download portal and operating the APIs, Popcorn Time has no direct video-related bandwidth costs since the user’s connection is being utilized for transfers. The downside is that users’ IP addresses are visible to the outside world, a problem Joker users do not have.

Finally and to address the excited headlines, comparing Joker to Popcorn Time is premature. The site carries no colorful and easy to access indexes of movies which definitely makes it a lot less attractive to newcomers. That being said, this lack of content curation enhances Joker’s legal footing.

Overall, demand is reportedly high. The developers told TF last evening that they were “overloaded” and were working hard to fix issues. Currently the service appears stable. Only time will tell how that situation develops.