Like many famous people and other celebrities online, Kim Dotcom has many tens of thousands of fans and followers. However, not all of these people have his best interests at heart.

The problem comes when people do a search for Kim’s Twitter account using Google. Although his own account with more than 113K followers appears right there in the top results, so does another bearing the Kim Dotcom name.

The account is fake, but it is set up to look like the real thing. People who know Kim will hopefully realize that tweets such as “EFF THE FEDS. IMMA BUST OUT OF JAIL TODAY. WATCH ME. MY MEGAESCAPE WILL BE BROADCAST LIVE ON THE INNANET. MEGAUPLOAD.COM 4 LYF,” aren’t genuine, but nearly 9,300 followers of the account appear not to.

To try and add further credibility to his own account, Kim asked Twitter to terminate the fake and give him a verified account. His correspondence with Twitter shared with TorrentFreak a few minutes ago is detailed below:

Description: This account is impersonating me. Using my photo, etc. Please terminate that account because a lot of people who search for me find the Impersonator instead of me.

Anything else? (optional): I would also humbly ask to please verify my account so that I have the verify label.
Kind regards,
Kim Dotcom

Of course, when it comes to being identifiable, Dotcom can quite literally put most of us in the shade – the man is a giant in every sense of the word, especially online. So to accompany his application he sent over some photo ID – his driving license. Things didn’t go well.

“Here is the reply I received [from Twitter] after I sent them a copy of my Hong Kong international driving license with photo and government stamp,” Kim told TorrentFreak.

“@Twitter declines to certify me. I faxed an ID. They think it’s fake. A search for my name shows imposter as the first result. Might quit!” Kim said in response to the rejection.

But hold on, there might be another way. Like millions of others, here on TorrentFreak we’re massive fans of Reddit and their AMAs. The site has a number of accepted ways for people to show who they say they are, so we suggested one method to Kim. Hopefully this will be enough for Twitter. 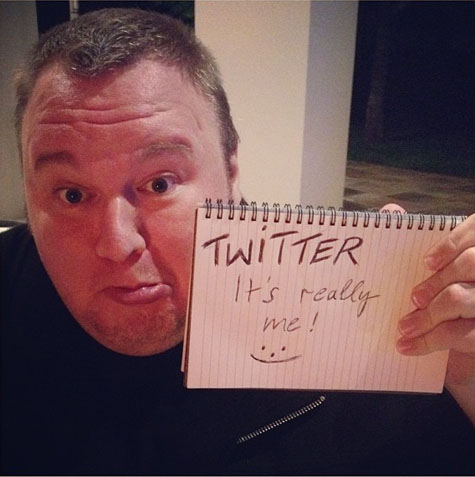 The full, genuine, real deal, verified-by-the-people Twitter account of Kim Dotcom can be found here, but with Facebook there is another problem, as illustrated in their email to Kim shown below.

—
We will not be able to assist you with your inquiry based on the ID you provided. Facebook requires all users to use their accurate first and last names. It is also important to note that using fake identification is against the law.
—

The problem? Dotcom is not accepted by Facebook as Kim’s second name.