Kim Dotcom Theory on Corporate Cyberlocker Use Supported By Survey

After the shutdown of Megaupload, Hollywood was quick to point its finger at other “rogue” sites, such as US-based cloud storage service Mediafire. The irony is that while the movie companies claim these sites are destroying their business, a majority of corporate employees depend on them.

This widespread legitimate use also applied to Megaupload. Founder Kim Dotcom told us last year that movie industry insiders and employees at the world’s top corporations were all using the service.

“Among our 180 million users is a large number of celebrities, musicians, film makers, actors, etc. and they love Mega. We have hundreds of premium accounts from employees of the companies the RIAA and MPAA represent. In fact 87% of the fortune 500 companies have premium accounts with us,” Dotcom said.

While the numbers above say little about the legitimacy of the files being shared by these users, a new survey reveals that it is common for employees today to use file-sharing sites (e.g. cyberlockers) to share and store work-related documents. 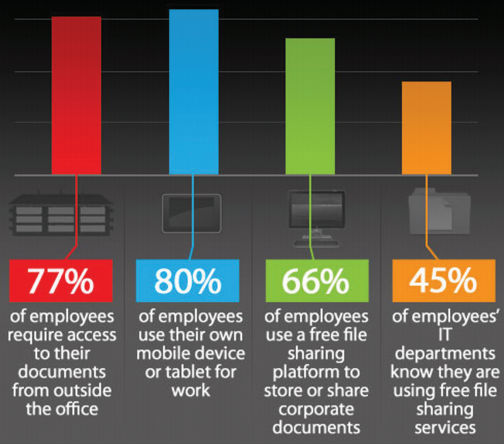 A breakdown of the result in different work sectors shows that file-sharing services are most used among employees in professional services (87%), closely followed by financial services (84%). Health care (57%), the creative sectors (55%) and government employees (54%) score below average.

The above doesn’t only emphasize the huge legitimate potential of cyberlockers. The widespread use of these services in the work setting also sheds a new light on the ongoing fight of Megaupload users to get their files back.

This week the EFF argued in court that the U.S. Government disadvantaged many former Megaupload users by shutting the site down without warning. By seizing the servers, they deprived millions of users access to their files. The EFF is supported by retired Judge Abraham David Sofaer who is very critical of the Government’s actions.

“I was thinking the government hadn’t learned to be discreet in its conduct in the digital world. This is a perfect example on how they are failing to apply traditional standards in the new context.”

Ignorance might play a role here. Judging from previous criminal investigations the U.S. Government is relying heavily on how the copyright holders portray certain websites. It wouldn’t be a surprise if the investigators were simply unaware of the many legitimate users, including thousands of government workers.