By now readers will be all too familiar with the rhetoric of the mainstream music and movie industries. So-called foreign “rogue sites” steal American content, steal American money, cost American jobs and damage the economy, the lobbyists insist.

While many BitTorrent sites of all shapes, sizes and directions are listed as “rogue” by both the RIAA and MPAA, these groups also define many cyberlocker services using the same terms. Heading up that particular list are the world-famous Megaupload and Megavideo, two companies founded by the larger-than-life character Kim Dotcom.

In a recent video (skip to 5m 10s) from Creative America, Kim is portrayed as an evil baddy, sucking the life blood from the creative industries. But today, Creative America, the RIAA and MPAA will have the shock of their lives.

“You should checkout the Mega Song and video. Hope you like it,” Kim told TorrentFreak. Somewhat intrigued we did, and we have never – EVER – seen anything as audacious as this before.

“When I got to send files across the globe, I use Megaupload,” declares Will.i.am, an artist signed to labels owned by RIAA-members Warner and Universal.

“When i’m sending my hits out I use Megaupload, ‘cos it’s fast. I can receive hits and I can send ’em out,” declares P Diddy, an artist signed to Interscope, a label owned by Universal.

Kanye West, signed to Universal-owned Def Jam, likes to use Megaupload “…because it’s the fastest and safest way to send files – period.”

Alicia Keys, who is signed to Sony-owned RCA, says she uses Megaupload “….because I know that I can get my music safely and quickly -and you know that i’m serious about my music.”

Snoop Dogg, signed to EMI-owned Priority, uses it “…because it keeps the kids off the street,” and The Game (Universal) says that even his lawyers know he uses it, “…and I got plenty of them.”

This stunning PR coup is a huge feather in the cap of Megaupload but Kim, who certainly has a colorful and sometimes chaotic past, seems to be taking it all in his stride. Far from the crazy character portrayed in the media, he was courteous and measured while speaking with TorrentFreak about this public support from the stars, and the behind-the-scenes support already being received.

“Amongst our 180 million users is a large number of celebrities, musicians, film makers, actors, etc. and they love Mega. We have hundreds of premium accounts from employees of the companies the RIAA and MPAA represent. In fact 87% of the fortune 500 companies have premium accounts with us,” Kim told us.

So what of Mega’s apparent rogue site status, is that of concern to the company?

“Mega might become one of the biggest customers of the content industry and all this ‘rogue’ nonsense will be forgotten,” Kim explains. “We want content creators to get paid!”

Easier said than done perhaps, but Kim says he has it all worked out. He told TorrentFreak the solution comes with Megakey, a product which provides Mega users with free premium services now, and free premium licensed music and movies in the future. All this will be financed through advertising and as usual, Kim has big, innovative and probably controversial plans in mind.

When Megakey is installed the software asks permission to modify where 10 to 15% of the user’s online advertising experience is sourced from.

“It works like an ad blocker but instead of blocking ads we show ads coming from Megaclick, our ad network,” says Kim. “This way we will generate enough ad revenue to provide free premium services and licensed content so that our users can have it for free.”

And the company believes the idea has huge potential.

“Imagine 450 million Megakey installations by 2015 with over 5 billion ad impressions per day. That pays for a lot of content,” Kim assured us. Looking at the graphic embedded below, traffic-wise the site is certainly a force to be reckoned with. 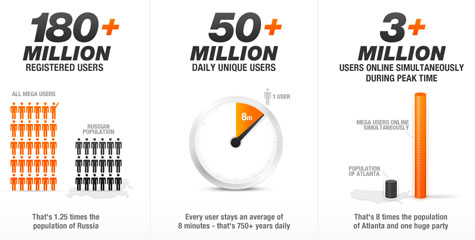 In future, free musical premium content will be provided through Megabox, described by Kim as the company’s iTunes competitor, while free premium movies will be supplied via Megamovie.com, a service we can reveal will be launched next year.

During the course of our discussion with Kim we also discovered an interesting feature that has been built into Megakey. Once installed the whole range of Mega sites can be accessed without the need to use the Internet’s DNS system, meaning that should SOPA kick in and the US government seizes Mega’s domains, users can still access the site.

“We implemented this to give users the fastest and most direct channel to our sites,” Kim told TorrentFreak. “Mega is not concerned about SOPA or Protect IP. We are a legitimate online service provider, online for 7 years.”

A lot has been said and written about Megaupload and Kim, including his earlier PR stunts. But this song, featuring artists on labels that are members of the RIAA, is on the next level.

Update: Universal Music has removed the video from YouTube on copyright grounds.