Lawyer Says He Was Deceived Into BitTorrent Copyright Trolling Scheme

For more than a decade, companies around the world have been trying to turn piracy into profit. For many this has meant the development of “copyright trolling” schemes, in which alleged pirates are monitored online and then pressured into cash settlements.

The shadowy nature of this global business means that its true scale will never be known but due to the controversial activities of some of the larger players, it’s occasionally possible to take a peek inside their operations. One such opportunity has just raised its head.

According to a lawsuit filed in California, James Davis is an attorney licensed in Oregon and California. Until two years ago, he was largely focused on immigration law. However, during March 2015, Davis says he was approached by an old classmate with an opportunity to get involved in a new line of business.

That classmate was Oregon lawyer Carl Crowell, who over the past several years has been deeply involved in copyright-trolling cases, including a deluge of Dallas Buyers Club and London Has Fallen litigation. He envisioned a place for Davis in the business.

Davis seemed to find the proposals attractive and became seriously involved in the operation, filing 58 cases on behalf of the companies involved. In common with similar cases, the lawsuits were brought in the name of the entities behind each copyrighted work, such as Dallas Buyers Club, LLC and LHF Productions, Inc.

In time, however, things started to go wrong. Davis claims that he discovered that Crowell, in connection with and on behalf of the other named defendants, “misrepresented the true nature of the Copyright Litigation Campaign, including the ownership of the works at issue and the role of the various third-parties involved in the litigation.”

Davis says that Crowell and the other defendants (which include the infamous Germany-based troll outfit Guardaley) made false representations to secure his participation, while holding back other information that might have made him think twice about becoming involved.

“Crowell and other Defendants withheld numerous material facts that were known to Crowell and the knowledge of which would have cast doubt on the value and ethical propriety of the Copyright Litigation Campaign for Mr. Davis,” the lawsuit reads.

Davis goes on to allege serious misconduct, including that representations regarding ownership of various entities were false and used to deceive him into participating in the scheme.

As time went on, Davis said he had increasing doubts about the operation. Then, in August 2016 as a result of a case underway in California, he began asking questions which resulted in him uncovering additional facts. These undermined both the representations of the people he was working for and his own belief in the “value and ethical propriety of the Copyright Litigation Campaign,” the lawsuit claims.

Davis said this spurred him on to “aggressively seek further information” from Crowell and other people involved in the scheme, including details of its structure and underlying support. He says all he received were “limited responses, excuses, and delays.”

The case was later dismissed by mutual agreement of the parties involved but of course, Davis’ concerns about the underlying case didn’t come to the forefront until the filing of his suit against Crowell and the others.

Davis says that following a meeting in Santa Monica with several of the main players behind the litigation campaign, he decided its legal and factual basis were unsound. He later told Crowell and Guardaley that he was withdrawing from their project.

As the result of the misrepresentations made to him, Davis is now suing the defendants on a number of counts, detailed below. 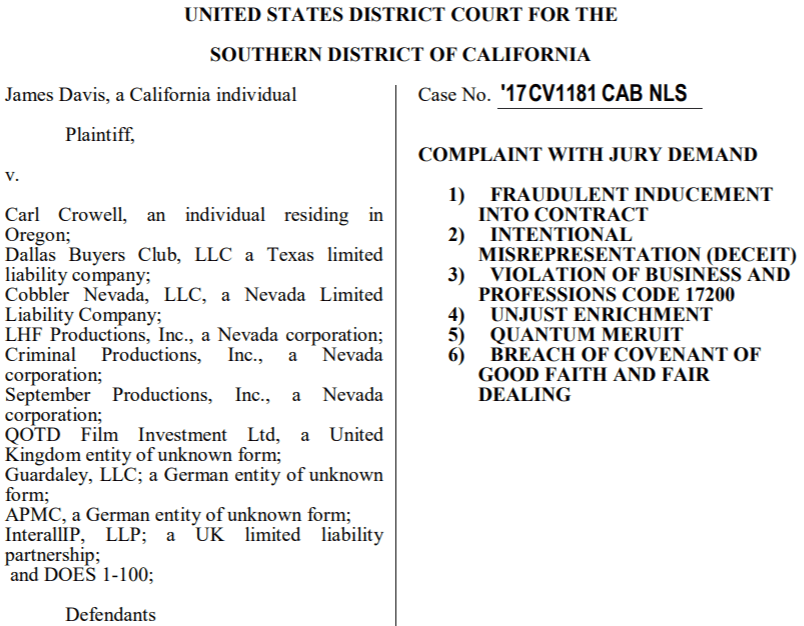 Requesting a trial by jury, Davis is seeking actual damages, statutory damages, punitive or treble damages “in the amount of no less than $300,000.”

While a payment of that not insignificant amount would clearly satisfy Davis, the prospect of a trial in which the Guardaley operation is laid bare would be preferable when the interests of its thousands of previous targets are considered.

Only time will tell how things will pan out but like the vast majority of troll cases, this one too seems destined to be settled in private, to ensure the settlement machine keeps going.

Note: The case was originally filed in June, only to be voluntarily dismissed. It has now been refiled in state court.