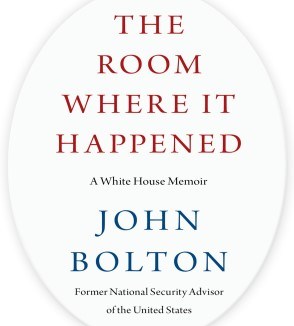 It doesn’t take much for a Trump-related story to be widely circulated in the media.

However, with his former National Security Advisor set to release a book looking back at his time in the White House, interest has been raised to new levels.

This is exactly what happened over the past few days when the media began publishing bits and pieces from ‘The Room Where It Happened.’ Bolton’s book is officially published tomorrow but is already dominating the news.

US Tries to Stop Distribution

President Trump and the US Government are not happy with the work, claiming it is “rife with classified information.” The book has not been approved by the US Government as Bolton walked away from the review process. As a result, the Government went to court in an effort to delay publication until it could be properly vetted.

On Saturday, US District Court Royce Lamberth denied a temporary restraining order (pdf). While he agreed that Bolton “gambled with the national security” and “exposed his country to harm,” any restrictions would come too late.

Judge Lamberth pointed out that the book had already been widely circulated to the press and with help from the Internet, even a handful of copies could destroy confidentiality.

“A single dedicated individual with a book in hand could publish its contents far and wide from his local coffee shop. With hundreds of thousands of copies around the globe — many in newsrooms — the damage is done. There is no restoring the status quo,” the order reads.

The order almost appeared to be a prophecy as pirated versions started to appear online soon after it came out. Helped by social media, copies of the book were shared through Dropbox, Google Drive, as well as classic pirate portals such as LibGen and The Pirate Bay. 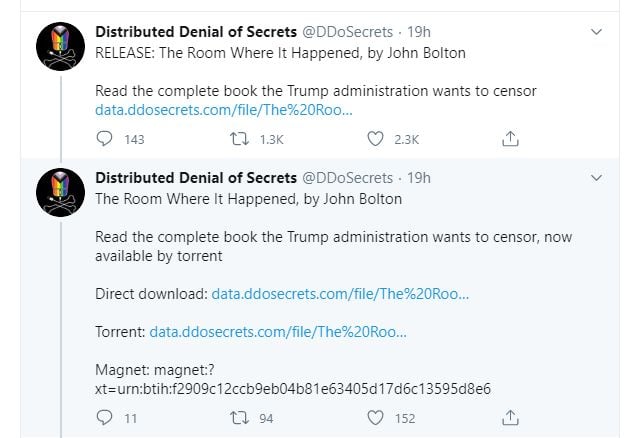 This triggered tens of thousands of downloads, if not more, with people openly passing on copies in public. As a result of the broad interest, two copies of ‘The Room Where It Happened’ now top the list of most downloaded books on The Pirate Bay.

The leak-publishing group ‘Distributed Denial of Secrets’ was one of the first to jump on the release. And to illustrate the widespread interest, the site’s server had trouble serving the 37MB book and nearly ground to a halt. Instead, the group now advises using the torrent release instead.

No, the links aren’t broken. The server is just SLAMMED by the thousands of people suddenly visiting it for the Bolton book, on top of #BlueLeaks which was just yesterday. Just hit reload, or better yet use the torrent

These pirated copies present another problem for the publisher. After fighting off the US Government’s request to halt distribution, Simon and Schuster is now trying to stop people from distributing unauthorized copies of the book.

Shortly after the first leaks surfaced, takedown notices from ViacomCBS, which owns Simon & Schuster, started being filed. The company successfully asked Twitter to take down tweets, including a popular one posted by Distributed Denial of Secrets. In addition, takedown notices were sent to other services as well, including Google Drive.

While the publisher may be able to take down some tweets and copies of the pirated book, stopping the spread will be impossible. To quote from Judge Lamberth’s order; “in the Internet age, even a handful of copies in circulation could irrevocably destroy confidentiality.”

The whole episode shows, with court confirmation, that censoring something on the Internet is nearly impossible. We have seen this time and again. Last week, for example, pirated copies of Gone With the Wind and Fawlty Towers flourished on pirate sites after official publishers took them down.

This is also where BitTorrent’s true power comes to the fore. As central servers either collapse under high load or are targeted by takedown requests, the torrents keep on going. Not even a court order can stop that.