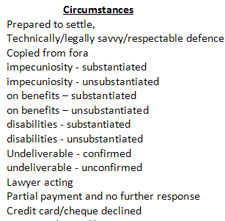 In 2007, UK lawyers Davenport Lyons (DL) got into the lucrative business of threatening to sue file-sharers. Their clients used anti-piracy tracking companies to harvest the IP addresses of many thousands of users allegedly sharing video games. This information was used to get court orders which forced ISPs to hand over their details.

DL then wrote to the individuals demanding several hundred pounds to make the threat of a lawsuit disappear. Some paid up, but many did not, and the only cases DL took to court were against those who didn’t defend themselves.

After mountains of bad publicity, DL withdrew from this business model. In May this year, the exact same scheme reappeared with UK lawyers ACS:Law. TorrentFreak asked company owner Andrew Crossley about the connections between ACS and DL – his reply: “NONE”. However, it was crystal clear that there were many links, not least that staff from DL were now working at ACS:Law directly on these cases – known cyber-squatter Terence Tsang as one example.

We’ve known all along that if those threatened put up a spirited defense and refused to be cowed they were never taken to court, but we had no proof as to the mechanism employed. Then, out of nowhere, months ago someone from inside either Davenport Lyons or DigiProtect leaked lots of sensitive documents to German news outlet Gulli.

Having remained secret until now, the documents made very interesting reading and along with a helping hand from TorrentFreak and armed with the leaked personal details and email addresses of some of the letter recipients, Firebird77 at Gulli was able to confirm the authenticity of the documents.

The first document reveals how the targets are ranked based on an estimation of how likely it is that they will pay up. Each alleged infringer has their details filled in on a form (download here from WikiLeaks). The document shows that despite the claims that an IP address alone is irrefutable evidence of an infringement and will lead to being taken to court, the reality is rather different.

Letter recipients are given a ranking based on many parameters. Does the law firm want to continue to pursue the person? What are the chances of success? A zero would mean “no action” up to ten which would mean the respondent is ripe for maximum pressure. One letter recipient hired Michael Coyle at Lawdit Solicitors to defend him and this earned him a “three”.

One part of the form is entitled “Circumstances” and this is a very surprising section indeed. Despite the “fact” that the law firms supposedly already have solid evidence of infringement that they say will lead to court action if recipients don’t comply, the section seems to show that they make their decisions on who to pursue based on the recipients’ personal circumstances.

One other circumstance is an eyebrow-raising “out of jurisdiction” (no rightful claim could be made the against the recipient) along with whether or not the individual was aware of that fact.

The form also lists possible defenses that recipients rely on, including the breach of their wireless router, a virus infected PC, not being at home when the infringement occurred, no knowledge of infringement or the possibility that someone else in the location carried out the infringement.

The 14 page document (download from WikiLeaks) details the agreement DigiProtect enters into with rights holders in order to exploit their copyrights for profit.

TorrentFreak discussed the documents with staff at the excellent BeingThreatened.com, a site set up to support and inform those targeted by Davenport Lyons and ACS:Law in the UK.

“These documents confirm what we have long suspected,” they told us. “This scheme is not about getting justice for the rightsholders at all; it is there to fill the pockets of companies like DigiProtect by exploiting many innocent people. Everyone with an IP address has reason to be worried about becoming a victim of these exploitative practices, whether they use P2P networks or not.”

Uk consumer magazine Which? earlier reported Davenport Lyons to the Solicitors Regulatory Authority for alleged “bullying”. It will be interesting to see how these documents develop that case.