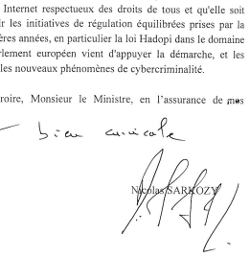 For years, French President Nicolas Sarkozy has been at the forefront of the war against Internet piracy. Earlier this year he booked a major victory when he got Hadopi, his three-strikes anti-piracy bill, signed into law.

Under France’s new Hadopi law, alleged copyright infringers will be hunted down systematically in an attempt to decrease piracy. Alleged offenders have to be identified by their Internet providers and they will be reported to a judge once they have received three warnings, of which the first were sent out recently.

Now that Sarkozy has got his way in France, the President is eager to conquer the rest of Europe with his draconian anti-piracy measures. To do so, he goes as far as hijacking an upcoming conference aimed at drafting clear rules against censorship and for freedom of expression on the Internet.

In a leaked letter that was exposed by the citizen advocacy group La Quadrature du Net, Sarkozy makes it clear that he has other plans for the conference that was initiated by the French and Dutch governments. The letter was sent by Sarkozy to the French Minister of Foreign affairs, and details how the conference can be used to promote France’s anti-piracy agenda.

According to Sarkozy, the October 29 conference offers an “opportunity to promote the balanced regulatory initiatives carried on by France during these past three years, and in particular the HADOPI law in the field of copyright, which has recently been supported by the European Parliament, as well as the measures taken to fight the new cybercrime phenomena.”

Not only does this letter show how far the French President is willing to go to spread his ideals, Sarkozy is also twisting the facts while doing so. The European Parliament has never openly supported Hadopi. Sarkozy is most likely referring to the recently passed Gallo report, but although that allows for more strict anti-piracy measures, it does not explicitly endorse three-strikes legislation. 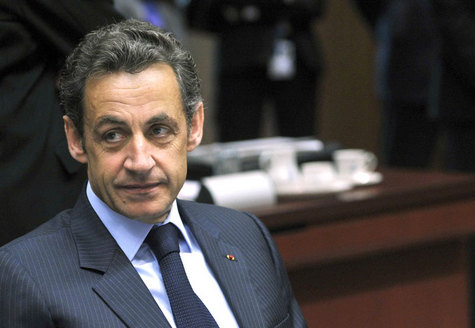 The letter makes it apparent that Sarkozy is indifferent to the massive critique of his plans, and that’s he’s bold enough to use a conference that should strengthen freedom of expression online, to push his own agenda. A dangerous development according to his opposition.

“This international conference on freedom of expression could become the Trojan horse of Sarkozy and his friends’ repressive and obsolete vision of the Internet,” Jérémie Zimmermann, spokesperson for La Quadrature du Net said.

“This coarse manipulation of French diplomacy, disregarding our most fundamental values, is one more example of the alliance between the entertainment industries and a few politicians, who seek to control the public space to remain in power. There is now a huge risk that this repressive vision of the Internet spreads out to the rest of the world”, Zimmermann concluded.

Indeed, there is no doubt that the French President would rather protect the interests of the entertainment industry than the rights of European citizens. And he’s determined to succeed, whatever it takes.