Have you ever tried to explain BitTorrent to someone who has no clue about P2P? It’s challenging, isn’t it? Things that most of us take for granted really make no sense to users that aren’t all that tech-savvy. Don’t believe me? Just go to a site like Yahoo Answers – and be amazed by the number of people who just don’t understand why their Windows Media Player won’t play back this damn torrent file.

Sure, we could make fun of these people. Or we could help them with an easy way to download torrents without having to know about the pros and cons of enabling DHT in uTorrent. Littleshoot decided to try the latter approach with a new BitTorrent browser plug-in that is being unveiled today.

Littleshoot’s BitTorrent plug-in has been in the making for quite some time now. The company behind it was founded by the former Limewire developer Adam Fisk who initially set out to develop an application for sharing data within a circle of friends. Littleshoot eventually changed directions towards general purpose, browser-based P2P and finally launched last November, albeit without BitTorrent integration.

The plug-in’s first iteration looked a little like a solution that didn’t really know which problem it wanted to solve. Littleshoot offered Gnutella downloads through your browser as well as the capability of publishing data on a separate P2P network that is based on the open source SIP protocol. Both were great in theory, but people hardly shared any data via Littleshoot, and when it comes to media sharing Gnutella isn’t exactly the first choice anymore either.

Enter BitTorrent. Fisk teamed up with Julian Cain for this release, who previously developed the Mac torrent client BitRocket as well as Kazaa’s never-released OS X client and who has also been involved in a bunch of other P2P projects over the years. Their ambitious goal is to transform Littleshoot into something like the Flash player of the BitTorrent world. Install it once, then forget about it, and it will work with any content, on any site.

I’ve had a chance to test multiple builds of the client over the last couple of weeks, and I must say Littleshoot has come a long way towards achieving this goal. Install the client, visit any torrent site, click on a torrent download link – and Littleshoot starts do download the files in question right within your browser on a Web 2.0-ish download page. The client even automatically starts a Flash-based audio player if you download an MP3 file, and files can be easily forwarded through Twitter, Facebook and other social networks. 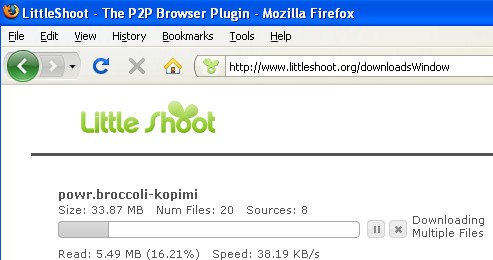 It also offers a search page that makes it possible to simultaneously search isoHunt, Youtube, Flickr, Yahoo Video and the Littleshoot P2P network, or any subset of these services. This search page may not be that useful to advanced users that prefer sites other than Isohunt, but again, it’s a great feature for beginners.

Littleshoot doesn’t come with any configurable options at this time. All data is saved in a default download directory, and the client seeds files indefinitely. However, Fisk told me that future versions of Littleshoot will offer the option to shut down the client after a certain ratio is reached. The current download page already offers details about your ratio as well as your up-and download rates. Speaking of future changes: Littleshoot is still clearly in beta stage. The Windows version seemed especially rocky in earlier builds that I got to test, but most things seem to be working when it comes to the final version that has been made available today.

So what’s the final verdict? Littleshoot may still have some room for improvement, but it’s definitely promising. Not only because this is the first BitTorrent client your mom will be able to use, but also because the Littleshoot team definitely has its eyes set on bigger goals.

One of the plans for future releases is an SDK that will make it possible for website owners to offload the distribution of any file to Littleshoot. Just drop a few lines of Javascript in your blog, and your MP3 file will be available as a P2P download. Says Fisk: “If a site relies on P2P services, they’ll display an “install plugin” window, just like the user sees when they don’t have Flash on sites that require it.” Kinda makes you wonder how long it will take for a torrent site to integrate something like this for all of its files.

The new version of Littleshoot is currently available on this beta page and will launch on the Littleshoot home page later today.

Guest author Janko Roettgers is a Los Angeles-based journalist. He is also the editor of P2P Blog.