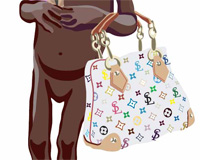 The artist, Nadia Plesner, started a campaign to raise awareness of genocide in Darfur, and raise money for the victims. All the profits she makes from selling the t-shirts and posters go directly to the “Divest for Darfur” organization to help the victims.

Nadia told TorrentFreak: “I started this campaign because of the distorted way the media prioritizes between big and small world news. How can Paris Hilton make more front covers than the genocide in Darfur? So, I “pimped” a victim, to see if it worked. And it did!”

Her campaign indeed generated a lot of attention, but not for the right reasons. For her “Simple Living” campaign, Nadia decided to dress-up a Darfur victim with a Louis Vuitton-inspired bag, and a Paris Hilton-style accessory dog. Louis Vuitton, however, was not amused by Nadia’s creative expression, and filed a lawsuit where they are claiming over $20,000 a day, if she continues with the project.

Nadia received her first letter from the Paris based retailer on February 22th. Vuitton kindly urged her to quit raising money for the good cause, arguing that it infringes their intellectual property rights. Nadia was surprised by the letter, and decided to send a reply in which she explained that she didn’t use the exact pattern of a Louis Vuitton bag, and that the drawing simply refers to designer bags in general.

“Sometimes recognizable objects are needed to express deeper meanings, and in their new form they become more than the objects themselves , they become art,” Nadia writes in her reply. “I therefore stand by my freedom of expression – artistic and/or otherwise – and will continue my Simple Living campaign in order to raise money for the victims of Darfur.”

Louis Vuitton did not warm to her “free speech” argument, and filed a lawsuit on April 15th. Nadia told us that Louis Vuitton now demands $7,500 (5,000 Euro) for each day she continues to sell Simple Life products, $7,500 for each day their letter is published on the website and $7,500 a day for using the name “Louis Vuitton” on her website. In addition they want her to pay their lawyer costs and $15,000 to cover other expenses they have incurred in protecting their ‘intellectual property’.

Initially, the whole issue seemed to be a misunderstanding, as it looked like Nadia was trying to make money from selling the tees and posters. “In January I wrote on my website regarding the campaign, that 30% of the profits are donated to Divest for Darfur. This is not correct. It is 30% of the PRICE which is 100% of the profits,” she explained to us. However, even when the information was corrected, Vuitton didn’t back off.

Intellectual Property expert and lawyer Hans Bousie, who offered to represent Nadia without charge, told TorrentFreak that Nadia could exercise her right to freedom of expression, and her right to artistic freedom in particular. That is, if the design clearly resembles the original design, otherwise Louis Vuitton wont have a strong case to begin with.

In our opinion, Vuitton is abusing the intellectual property argument. They simply do not want to be associated with genocide and the darker sides of the world. This strategy obviously backfired. We encourage everyone to buy a poster or tee, or at least spread the word about this campaign and Vuitton’s shocking response.