Pirate video streaming sites are booming. Their relative ease of use and on demand viewing makes them a viable alternative to P2P file-sharing, which has traditionally dominated the piracy arena.

Over the past months, several newcomers appeared on the scene, some of which have quickly grown to become serious traffic magnets.

Fmovies.to is one of these relative newcomers. In tandem with the similar looking 123movies.to, the streaming service has built a user base of millions of people since the start of the year.

The downside to this success is that copyright holders are bound to come knocking, and this is exactly what has happened. A few days ago Fmovies.to and its operators were sued in a Florida federal court by the Philippine media conglomerate ABS-CBN.

In a complaint filed at the U.S. District Court for the Southern District of Florida, the media company brands Fmovies as a classic pirate site.

“Defendant’s website is a classic example of a pirate operation, having no regard whatsoever for the rights of ABS-CBN and willfully infringing ABS-CBN’s intellectual property,” the company’s lawyers write (pdf).

“As a result, ABS-CBN requires this Court’s intervention if any meaningful stop is to be put to Defendant’s piracy,” the complaint adds, explaining that several of its movies are freely available on the site.

An ABS-CBN movie playing on Fmovies 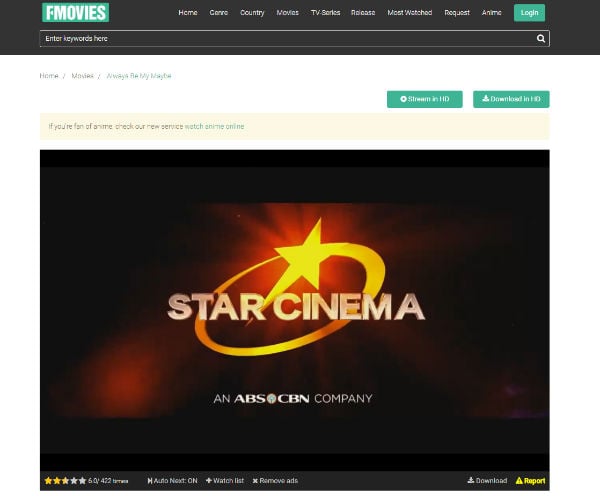 ABS-CBN accuses Fmovies.to of unfair competition and several counts of both trademark and copyright infringement, direct or through the site’s users. In doing so, they argue that the streaming service has cause them substantial harm.

“Defendant’s Internet-based website business is an illegal operation, infringing on the intellectual property rights of ABS-CBN through its distribution and performance of ABS CBN’s Copyrighted Works and using the ABS-CBN Marks to promote, advertise, and distribute such content.”

At this point it’s unclear who is operating the site. The media company notes that the domain names are registered anonymously so it’s very possible that the operators are not from the United States.

However, ABS-CBN argues the court has jurisdiction over the defendant since the site is operating in the state of Florida.

Through the court case the media conglomerate is seeking damages, which may run to millions of dollars. In addition, they request a permanent injunction to bar the operators from running Fmovies.

This includes a request to seize the site’s current and future domain names that are tied to copyright infringements.

This is not the first time ABS-CBN has gone after pirate sites and recent history shows that the consequences can be quite severe. In a default judgment last year, a U.S. federal court in Oregon ordered the operator of several tiny streaming sites to pay $10 million in damages to the company.

However, with a user base of millions of people, Fmovies.to is by far the largest movie streaming site to be targeted in a U.S. Court, although probably not the last.