With The Expendables 3 now officially released in theaters, the autopsy over its leak last month and the potential effects on box office figures has begun.

Many news outlets reported yesterday that the first weekend’s takings represent a flop for the third in the Expendables franchise and, of course, those closest to Hollywood are pointing the figure firmly at piracy.

But on the ground, on some of the very sites accused of facilitating piracy of the action movie, there are signs which suggests that this leaked title is being treated somewhat differently to any that have gone before.

Noting that the site was named in a Lions Gate lawsuit, TF monitored for the presence of The Expendables 3 torrents on popular torrent site LimeTorrents. The result is shown in the image below. 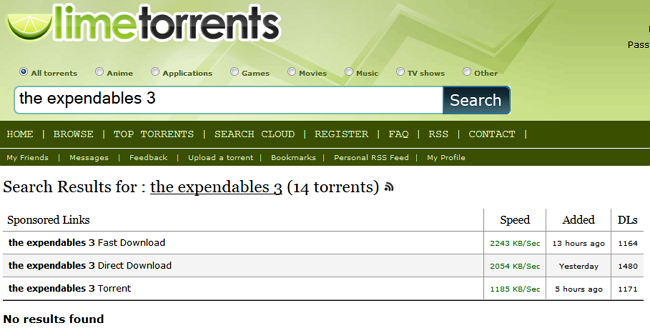 While the site lists 14 torrents, not a single working Expendables 3 torrent appears in the search results. The three that do appear are sponsored links that do not lead to anything useful.

But while LimeTorrents are clearly doing all they can to comply with the terms of a lawsuit, other sites that have not been named by Lions Gate also appear to have been taking action.

KickassTorrents is the world’s second largest torrent site and the go-to place for many looking for fresh content. However, anyone searching for leaked Expendables 3 torrents will be going home disappointed. There are currently nine torrents returned in results, all of which are trailers. The leaked movie cannot be found.

It’s worth noting that like many of the leading torrent sites, Kickass removes torrents following copyright holder requests, so that goes someway to explaining why the Expendables 3 torrents have all disappeared. What is notable, however, is that no fresh ones seem to be reappearing as is usually the case.

“We have a person dedicated to read all incoming DMCA requests carefully and process those which are formatted according to the DMCA requirements. At the same time this person ignored requests that are wrongly formatted.”

“We believe that most DMCA requests are automatically generated because we frequently receive requests to remove forum topics where a movie name specified in the title.”

There’s a similar story over at RARBG, the site placed 10th in our Top Torrent Sites 2014 post. A search produces the two torrents shown in the screenshot below and as they clearly point out, these definitely ain’t The Expendables.

The effect of these takedowns, whether from rightsholders or introduced on a voluntary basis, can also be seen on torrent sites that specialize in indexing torrents found elsewhere. BitSnoop, the 9th most popular torrent site online with an index of 23 million torrents, currently has none related to The Expendables 3.

Over at Torrentz, a meta-search engine that indexes content on other sites, we can see that just four torrents are returned following an Expendables 3 search, none of which are the movie in question.The links at the top are sponsored and don’t relate to torrents.

The note at the bottom reveals that 41 torrent links have been removed following DMCA notices and their euro equivalent. Again, no more torrents seem to be reappearing.

While torrents disappearing and not reappearing within major torrent sites is quite unusual in itself, perhaps the most dramatic effect can be seen in Google search results.

As previously documented, Lions Gate has put in a herculean effort to have listings removed. This, combined with any torrent site self-censorship efforts, has resulted in a tiny number of usable entries in the first 20 pages of Google results for common searches such as ‘The Expendables 3 + download + torrent’.

Of course, more experienced downloaders and those who persevere through a few searches can still find torrents and other ways to watch the movie. Torrents still remain on The Pirate Bay too, but there are clear signs that the leak of this movie is being treated differently from any other in recent memory, and not only by those involved in its legal distribution either.