For many years Japanese manga companies had a tendency to ignore the majority of overseas markets, despite the potential for lucrative trade.

However, powered by a global Internet and passionate fans with translation abilities, scanned copies of manga titles first trickled and then flooded into the West, creating a massive market and future demand for this Japanese cultural product where none previously existed.

Manga pirates often take credit for what amounted to a highly successful unpaid marketing project but having seen the potential, manga publishers understandably want this market for themselves. In more recent years, great strides have been made toward giving manga fans outside Japan improved legal options but pirate sites still exist and publishers now want them gone.

Ever since an investigation was revealed into the former operator of manga piracy giant Mangamura, publisher Shueisha has been closely connected to an increasing number of large piracy investigations. From the disappearance of Mangastream in 2019 to the shutdown of Mangabank in 2021, Shueisha (along with anti-piracy partners Shogakukan, Kadokawa and Kodansha) have rarely been far from the action.

In January 2019, Shueisha launched direct publishing platform MANGA Plus with accompanying mobile apps. It’s proven popular with fans for the range of free content in multiple languages but for a number of reasons it fails to compete with pirate sites.

For example, readers of many series are met with a message stating, Our current license prohibits us from publishing the in-between chapters, a problem pirate sites never face. These types of issues aren’t insurmountable long term but in the short term, pirate sites obviously prove attractive.

Need Sensitive Information From Users? Just Ask Them For It

To get a better idea of what customers want from MANGA Plus, the company is running a survey asking questions about the languages read most on the service, quality of translations, potential purchasing habits (including volume and preference for in-app currencies), how much users would pay to bridge the “missing chapters” issue, and which new comics users would like to see on MANGA Plus.

These are obviously solid questions for improving customer experience, overall satisfaction, and for gauging what people are prepared to pay to get the features they want. But of course, Shueisha’s manga business is challenged by illegal pirate alternatives, something the company doesn’t even try to hide.

As early as question four in the survey, Shueisha invites users of its MANGA Plus service to admit to copyright infringement, with question five asking them to name the pirate site they use often (or occasionally) to break the law. 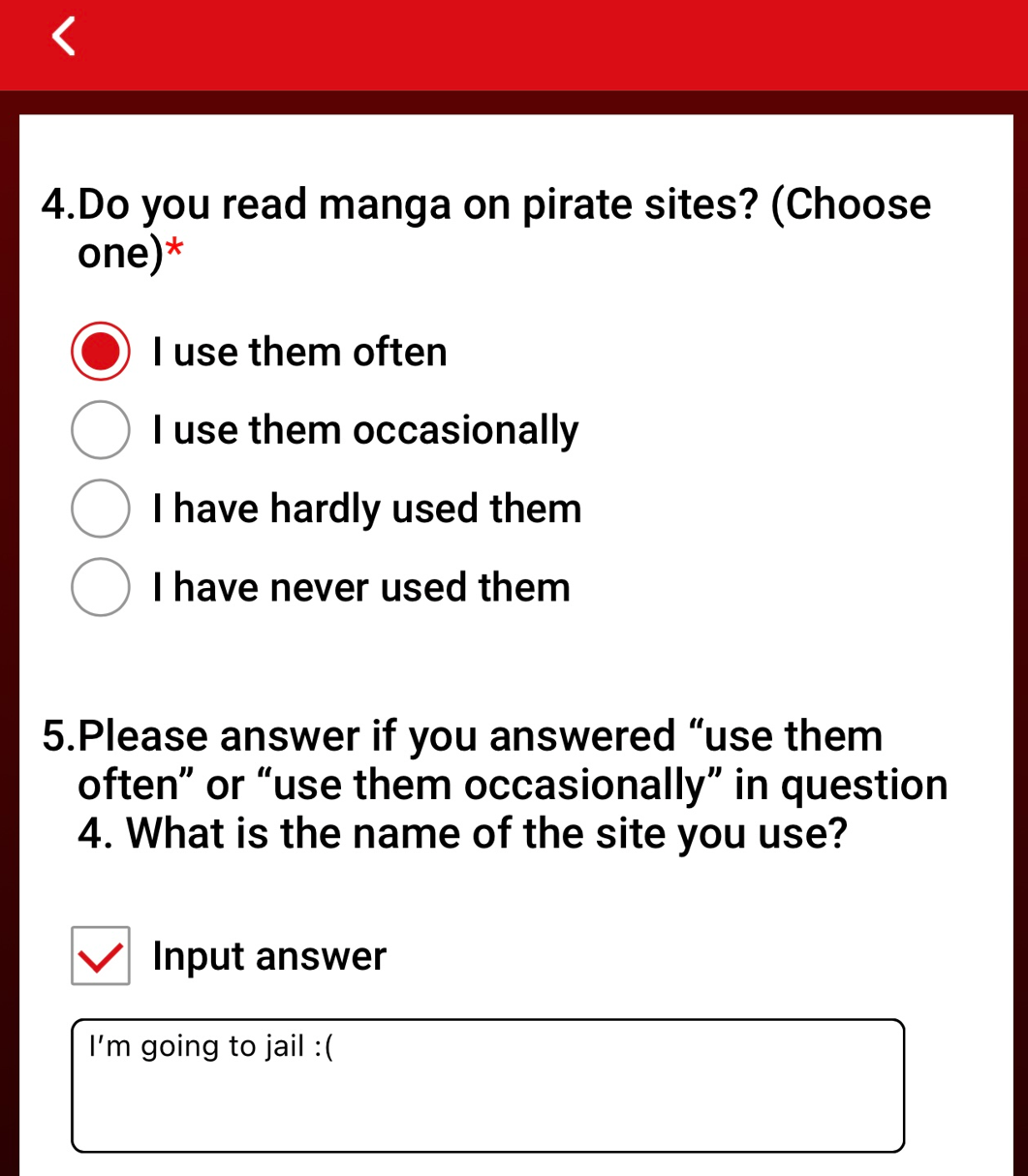 There are two ways of looking at these questions, with the less cynical suggesting that Shueisha simply wants to look at these platforms and work out what it can do to be more like them, whether that relates to the speed of release, the sheer volume of content, functionality, and/or familiarity. Indeed, question six does just that. 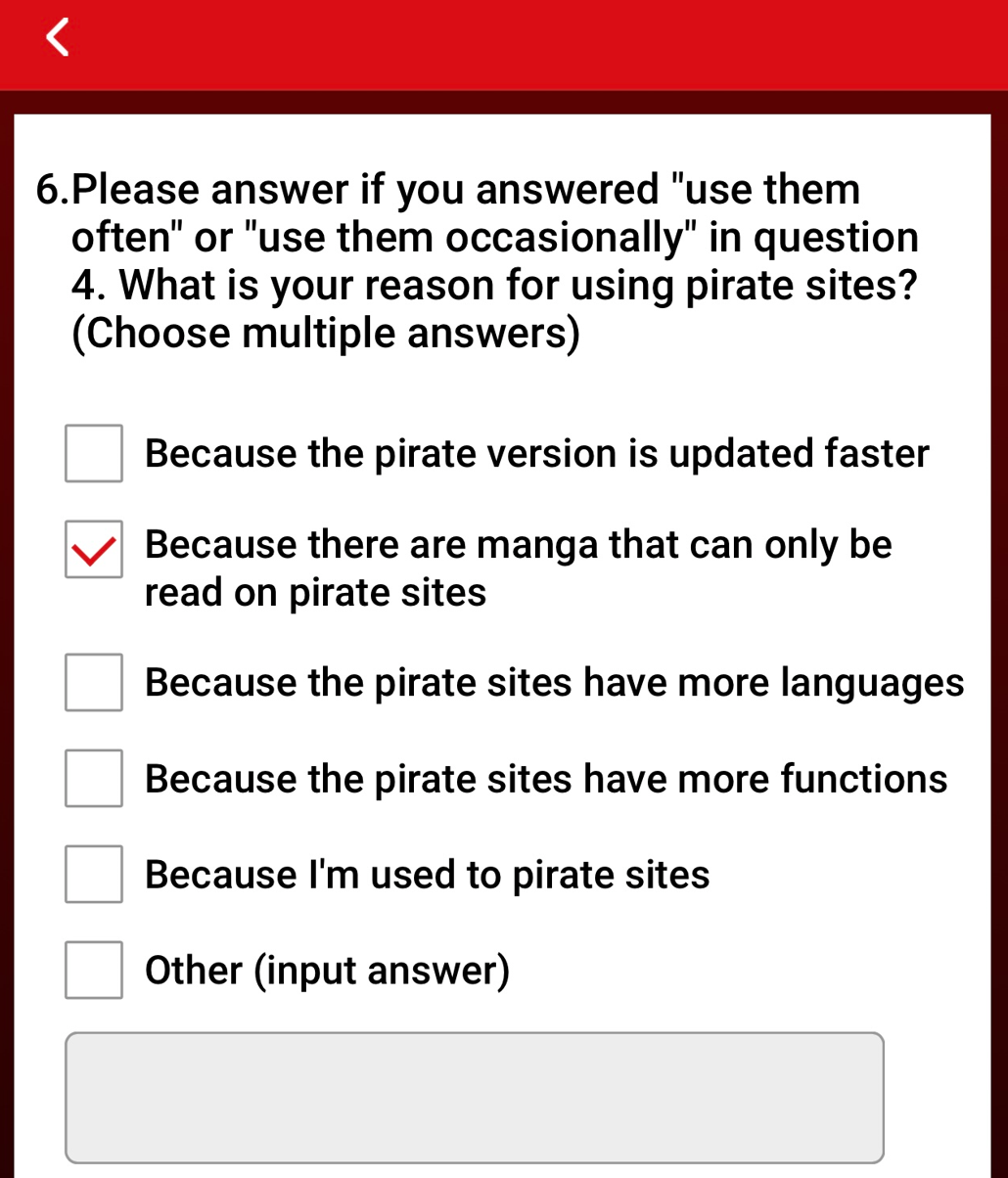 Question eight directly asks how MANGAPlus can be improved, again with an emphasis on piracy. Options include update speed compared to pirate sites, catalog size, language support and the number of works available for free. It even acknowledges that users of MANGA Plus may have heard about Shueisha’s legal service on a pirate site.

Should People Be Confessing to Piracy?

Text on the app and on the website variant of the survey differ slightly, with the app version offering assurance as follows: “Your survey responses will just be used to help us make future decisions regarding Manga PLUS, so please feel free to answer honestly.”

Of course, running a survey like this on a platform used by manga fans makes absolute sense since answers are provided by active users in the best position to offer advice. That said, users of MANGA Plus putting themselves into a database of known piracy users, controlled by a company that has a reputation for cracking down on piracy, might not be the best idea – at least according to any lawyer.

Like most companies, Shueisha collects personal data including identification code[s] and location data unique to each mobile device, browsing history, plus email addresses or account IDs where relevant. These are retained for all the usual business reasons including “prevention or taking measures of wrongful act.”

Data collected from users can also be shared with Shueisha group members including VIZ Media, also known for its anti-piracy activities. Shueisha also reserves the right to hand over information to third parties in cases based on “laws and regulations including inquiry pursuant to Criminal Procedure Law.”

In the end, users will do what they feel is most appropriate but there are plenty of reports online of users being happy to hand over the requested information. In particular, people seem happy to list the pirate sites they like the most, which of course will not influence Shueisha in any way when it decides its next list of pirate sites to take down.

The interesting angle here is that at least today, Shueisha sees pirate sites as competition, as entities to keep up with, emulate, and ultimately beat. The big question is whether innovation will continue if it succeeds in taking most of them down, or whether it will use the data on how much people are prepared to pay to capitalize on its new market.