Sites offering manga comics and magazines are a huge deal on the Internet, particularly ones that users can access without paying. This, of course, runs counter to the business plans of many manga creators.

Unfortunately, however, many manga titles are only officially available in certain languages. This has left a gap in the market for unofficial ‘scanlation’ sites that have stepped in to meet demand by offering scanned copies of physical publications supported by fan-made translations.

Mangadex is one such platform, one with a massive following too. Operating from both MangaDex.org and .com, according to SimilarWeb stats the site pulls in more than 30 million visits per month. As a result, it was no surprise that when it went down a few days ago, users began to panic, despite the site’s official explanation on Twitter.

We will be going offline within the next 24hrs or so while we move to a new hosting service and perform server maintenance. We are expecting to be down for roughly 72hrs ?

While the site may indeed return in the hours or days to come, the downtime wasn’t broadly announced in advance, which can indicate that something unexpected happened to force some kind of change. The site hasn’t been forthcoming with any information on this front but TorrentFreak has learned that it is facing legal pressure, which may (or indeed may not) be connected to the current downtime.

On December 20, 2019, attorney Evan Stone – who has a reputation for chasing down pirates – requested a DMCA subpoena at a Texas court to be served against Cloudflare on behalf of his client, VIZ Media, LLC.

“The purpose of the accompanying subpoena is to obtain the identity of the
alleged copyright infringer in control of the internet domain listed on in the subpoena.
The information obtained will be used only for the purpose of protecting the rights
granted to my client under Title 17 of the United States Code,” the filing reads.

An attached ‘Electronic notice of copyright infringement’, signed by Eric Green of anti-piracy company Remove Your Media, lists the Japanese manga title allegedly being infringed as ‘Boruto’. The website URL listed in the document belongs to MangaDex. 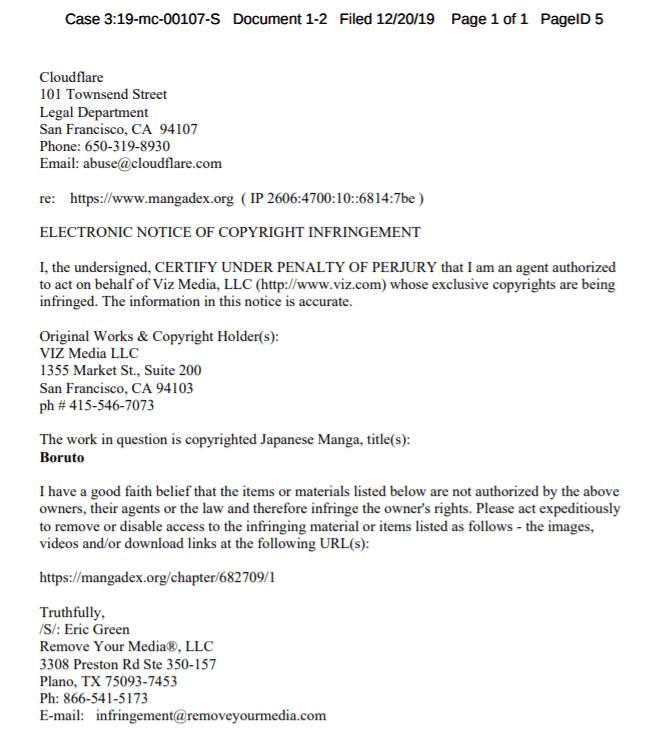 The DMCA subpoena requires Cloudflare to hand over “identifying information, including name, e-mail address, physical address, billing information or any other relevant contact information for the alleged infringer who controls the site at mangadex.org and/or the domain itself.”

If Cloudflare is to comply with the subpoena, it will have to supply the information listed above to attorney Evan Stone on or before February 8, 2020. Whether the information will indeed be of use in identifying the operator of MangaDex is unknown.

Overall, it’s been a tough few months for fans of scanlation platforms. In September, Manga Rock said it would close down in order to launch a legal platform. Last month, Mangastream disappeared after being targeted by a DMCA subpoena obtained by Japanese publisher Shueisha.

Whether these closures will massively boost sales on official platforms remains a question, however. A recent study published by Professor Tatsuo Tanaka of the Faculty of Economics at Keio University concluded that while selective takedowns may have a positive effect on sales, piracy may boost sales of some comics.

The DMCA subpoena and related documents can be found here (1,2,3)