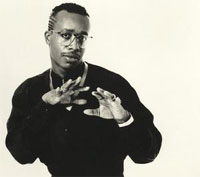 There is a great divide between artists on how music piracy should be addressed. On the one hand there are the Lily Allens who believe that tough anti-piracy legislation will increase their profits, while others including Radiohead and Moby think that the RIAA and other lobbyists should stay away from their fans.

The latter group has not been very successful in convincing the big labels to change their anti-piracy strategies, but when MC Hammer says STOP they will have to listen.

In a recent interview Hammer commented on the industry’s struggle with piracy and the future of music in the digital age. In Hammer’s view, the RIAA’s legal battles against file-sharers have only alienated buying customers. ”The approach that the music industry took to fight piracy was the wrong strategy,” he said.

Aside from going after individuals, the entertainment industries have also targeted ISPs, for enabling their customers to pirate. The most prominent case at the moment is that of AFACT against iiNet, where the anti-piracy group wants the Aussie ISP to disconnect repeat infringers.

Using a murder and gun analogy to appeal to his fellow rappers, Hammer argues that AFACT is going after the wrong party by targeting the ISP.

”When there is a murder done with the gun, do they go back to the guy who sold the gun at the store and arrest him? No they don’t. They arrest the person who did it. So in this particular case, somebody is stealing content using the freeway. You can’t go back and sue the construction men,” Hammer said.

In addition to calling for a stop to the legal battles, Hammer thinks the music labels should focus more on digital content instead of trying to sell plastic to a generation of people that have never even owned a standalone CD player.

‘Digital files are no doubt not just the future, but the present. I think that it’s [the CD format] on its last legs, it’s on an artificial respirator,” Hammer commented.

“I don’t know what would turn them on about having to go through that terrible exercise of trying to open the packaging – it’s unbelievable when you’re trying to open a CD, right? You need a box cutter … it’s a tough deal to get it open. And once you get it open … you go and upload it to your computer,” Hammer added.

Hammer has a fair point there. Digital sales are breaking records year after year in terms of revenue generated, while the decline in physical CD sales is more likely to be a sign of the times rather than a side-effect of music piracy.