With over a million visitors a day, Megashare is one of the largest video streaming portals on the Internet.

The site operates from .sh and .info domains and has enjoyed steady growth since its launch in 2010.

However, out of nowhere, visitors were welcomed by a rather shocking notice on the site’s homepage this morning. Apparently, Megashare has plans to shut down due to trouble with its video hosting provider.

“Because there are problems with video hosting company, MEGASHARE is closing and not updaing new movies in future. Thank you for your support!” the announcement reads. 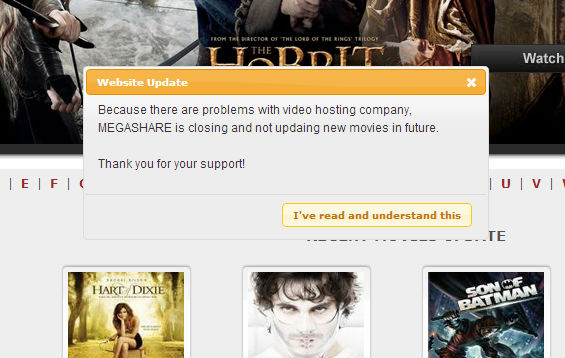 The abrupt decision comes as a surprise, and seems illogical for a site of its nature. Megashare doesn’t host any of the videos itself but relies on files from third-party sites such as Google, Putlocker and Sockshare.

Interestingly, a few days ago we published an article which revealed that Megashare was one of the streaming portals that used Google as video hosting provider. Whether this is related to the “video hosting troubles” is unknown.

In any case, users are not happy with the site’s decision and the site’s Facebook page and Twitter are filling up with people begging the site not to throw in the towel. Whether this will have any effect remains to be seen.