Google has been in the crosshairs of the entertainment industries for a while now. These companies believe that Google is not doing enough to prevent pirate sites from showing up in search results.

However, there is another less visible problem that cropped up in recent months. Increasingly, streaming portals with a focus on the latest pirated copies and TV-shows are using Google as a source.

A German anti-piracy outfit has identified more than 18,000 pirated videos that are featured on more than a dozen large sites. All these streaming sites use the same movie sources without charge, and the bandwidth bill goes to Google.

Together these streaming portals are good for several million daily visitors, which means that Google must be seeing a lot of traffic originating from these sites. The screenshot below shows a copy of The Wolf of Wall Street on YIFY.tv, available in several video qualities and with subtitles if needed. 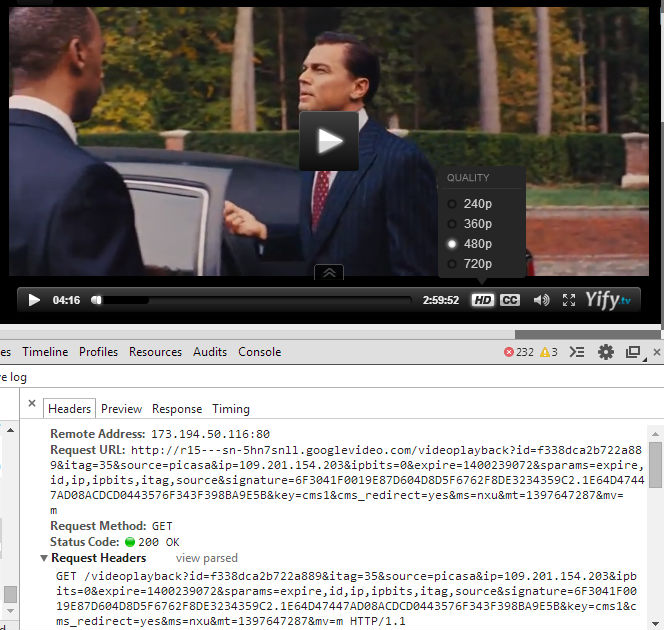 It’s unclear where the videos are hosted, but the URL above shows the googlevideo.com domain. In addition, it includes a “source=picasa” string, suggesting Google’s image hosting service has something to do with it.

While the site owners are benefiting from the free storage, copyright holders are less excited. A German media outfit, which remains unnamed, reportedly sent requests to Google last month hoping to take down the files, but without success.

Since the files remain online, the lawyers of the media company have now applied for an injunction against Google at a local court.

Two weeks ago Warner Bros. also asked Google to remove several of these URLs from its search engine. These requests were denied, most likely because the videos can’t be accessed directly through the link Warner provided.

In a comment to TorrentFreak, Google stresses that users are not permitted to distribute copyrighted content without permission. The company is actively trying to stop these kinds of abuses and also responds swiftly to takedown notices.

“Use of Google platforms to host infringing materials is a violation of our terms of use, and we design features into our systems to make them unattractive for this kind of abuse,” a Google spokesperson told TF.

“We also respond quickly to disable access to any materials on our platforms identified to us by copyright owners as infringing,” Google adds.

Why the thousands of Google-hosted videos on these streaming portals remain online is unclear. It could be that Google indeed removed the files in question, but that they were re-uploaded. Another possibility is that the copyright holder didn’t correctly identify the source file, as Warner Bros’ takedown notice suggests.

One of the additional problems copyright holders face is that the URLs of the videos are harder to identify. Automated takedown tools can’t easily spot where the files are coming from, which makes it more complicated to send takedown requests.

It will be interesting to see how this issue will be dealt with in the future. It’s clear that neither Google not the copyright holders are happy with the current situation. For now, the only ones benefiting are the streaming portals and their millions of users.