Well over three years have passed since Megaupload was shutdown, but aside from Andrus Nomm’s plea deal there has been little progress in the criminal proceedings.

Dotcom and his fellow Megaupload defendants are still waiting to hear whether they will be sent to the U.S. to stand trial.

The extradition hearing is currently scheduled to start early June after a request from Dotcom’s lawyers to postpone was turned down last month.

But there’s more legal trouble for the defunct file-hosting service. In addition to the criminal case, Megaupload and Kim Dotcom were sued last year by the major record labels and Hollywood’s top movie studios.

Fearing that they might influence criminal proceedings, Megaupload’s legal team previously managed to put these civil actions on hold.

After being delayed for a year the proceedings were expected to continue this month. However, since the extradition hearing has yet to take place, Megaupload asked the court to freeze the MPAA and RIAA cases until October.

This week District Court Judge Liam O’Grady granted the request under the same conditions as the previous order. 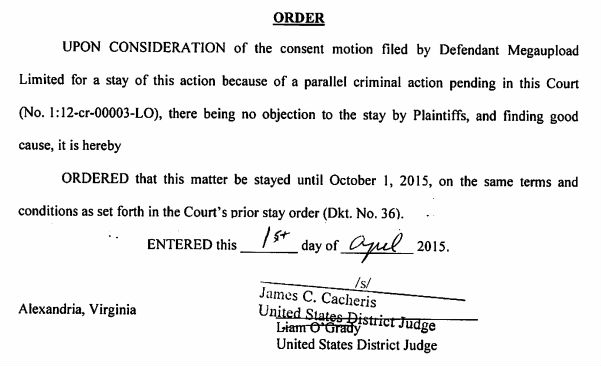 The ruling means that both the MPAA and RIAA cases will now be delayed for another six months. The movie and music studios consented to the freezing request, which made it a relatively straightforward decision.

A stay has not yet been granted in a third civil suit filed by the music group Microhits. In this separate case Megaupload’s legal team was ordered to present an oral argument in support of its motion, which will take place later this month.