Despite the widespread availability of legal streaming services, piracy remains rampant among millennials in North America.

This is one of the main conclusions of a new survey conducted by Launchleap. The data come from a survey among millennials between 18 and 35, and zooms in on pirate streaming preferences in this age group.

The results show that more than half of the respondents, a whopping 53%, admit to having used illegal services to stream movies or TV-shows over the past month. Legal streaming services remain on top with 70%, but interest in more traditional platforms such as TV, DVDs or Blu-Ray is clearly lagging behind. 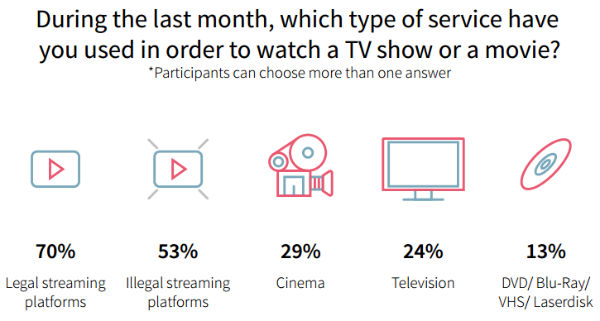 The respondents don’t appear to be particularly bothered by their habit. Only 7% of the people questioned say they feel guilty when they watch a pirated movie, the remaining 93% experience no guilt.

The survey makes it clear that millennials use legal and pirate streaming services in tandem. Nearly half of the people who pay for a legal platform like Netflix also use pirate services on occasion.

When they want to watch a movie, their first instinct is to go to Netflix, to see if its available there. If that’s not the case, many use an illegal offering to get their fix.

The dominance of Netflix appears to be an driving factor here. In many cases, titles are legally available elsewhere, but millennials don’t seem to look much further than Netflix when it comes to legal content.

Finally, while pirate streaming services are taking over from torrents, the latter is still most often mentioned as the platform that got millennials introduced to piracy. However, this trend is likely to change when the new generation grows up.

Regarding motivation, the study finally shows that money remains an important factor in the decision to pirate, and is even more important than availability for most.

All in all the findings suggest that there’s still a long way to go before piracy becomes a non-issue, even in North America where legal platforms are readily available. And with the growth of easy to use pirate streaming services, this challenge isn’t getting easier anytime soon.