With millions of visitors per month, Uploaded is one of the largest file-hosting services on the Internet.

Like many of its ‘cloud-hosting’ competitors, the service is also used to share copyright-infringing material, which is a thorn in the side of various copyright holder groups.

This has already led to legal trouble for Uploaded’s parent company Cyando AG, which is currently involved in a legal battle with copyright holders in Germany.

The rightsholders believe that Uploaded is not doing enough to prevent repeat infringements and argue that the company should therefore be held liable for the infringing actions of its users.

While Uploaded hasn’t commented on the accusations out of court, recent developments show that something has definitely changed behind the scenes.

This week, Uploaded terminated the accounts of a large group of users who presumably used the site to share infringing material. The German news outlet Tarnkappe suggests that this is likely a direct response to the legal proceedings.

On several forums, including WJunction, users are reporting that their accounts have been permanently suspended by the file-hosting service.

“Due to the high frequency of reported copyright notifications and evaluation of our compliance department, we regret to inform you that – according to our Terms and Conditions – your account with ID ***, was deactivated,” the message sent by uploaded reads. 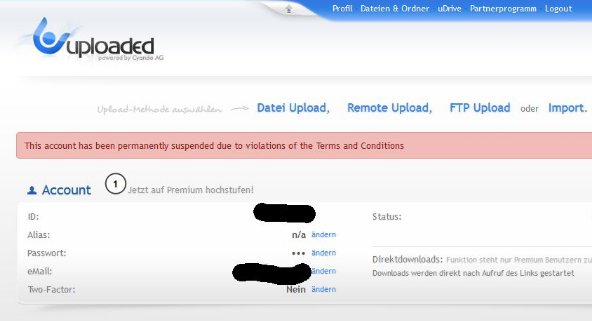 While Uploaded has terminated accounts for similar reasons in the past, the number of complaints this week is unusual. Some even suggest that the site may not be around for much longer.

“So all our accounts are banned on the same day? I think very soon they will close the site!” one uploader wrote.

For now there is no indication that Uploaded is shutting down anytime soon. However, the recent terminations suggest that the site is getting tougher on users whose files are frequently flagged by rightholders.

The suspensions will mostly impact people who upload and share many pirated files on the site, often for profit. This is also the group of users copyright holders are most concerned about.

Uploaded’s actions are reminiscent of Rapidshare, which also took measures to ban frequent copyright infringers from its service. The company adopted one of the most restrictive sharing policies, but had to shut down after a while, as the company became less profitable.

TorrentFreak reached out to Uploaded to find out more about the apparent suspension spree, but we have yet to hear back from the company. The affected users, meanwhile, are looking for alternatives to share their files.

EU Court: YouTube and Uploaded Are, In Principle, Not Liable For Pirating Users