Mininova Enters List of 100 Most Popular Sites on the Internet

Mininova went head to head with Torrentspy for over a year but over the past few months Mininova clearly took the lead. This week they reached the same level as the popular social bookmarking website Digg.com, and their growth doesn’t seem to stop here.

The Alexa 100 is a list of the domains that generate the most traffic on the Internet. The fact that Mininova managed the top 100 is even more impressive if you take into account that over 25 local Google domains are among these 100 domains. Other popular sites in the Alexa 100 are Yahoo!, YouTube, Myspace, Wikipedia and EBay.

A the moment Mininova has 2,000,000 daily visitors who generate nearly 20,000,000 pageviews. Mininova continues to grow and served over a billion .torrent downloads in less than six months. 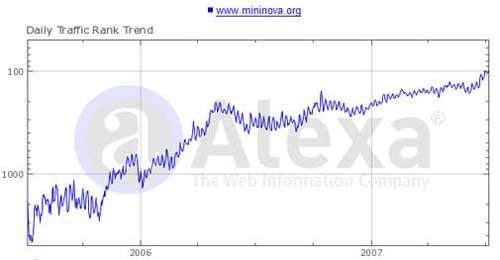 Most other BitTorrent sites aren’t doing too bad either. The Pirate Bay, Torrentz and Demonoid are all listed among the top 500 most visited sites, and more sites will probably join them in the months to come. Even Isohunt and Torrentspy continued to grow last month, despite the negative publicity. Here’s a combined graph of the traffic rank of the five most popular BitTorrent sites at the moment.

Compared to last year, all these sites continued to grow and attracted more visitors. Will it ever stop?