In January, when mininova celebrated its second anniversary, they passed the 1 billion download mark. It wasn’t really a surprise that getting to 2 billion wouldn’t take another 2 years, but not many expected that it would happen this fast.

Niek, the founder of mininova is excited about reaching this milestone, and hopes to continue serving torrents at this rate. One of the factors that contributed to mininova’s continued success is the redesign of the front- and back end last December, that dramatically improved the search and browse speed.

In a response to the great news Niek told TorrentFreak:

“I never expected mininova to reach 2 billion downloads this fast. We’ve grown very fast over the past months, in users as well as downloaded torrents. At the moment we have approximately 2 million users, and 10 million pageviews every
day.”

The graph below shows how steady mininova has been growing since its launch back in January 2005. More stats can be found at the Mininova blog.

So, congratulations to mininova, and I expect we will see the 3 billionth download by the end of summer. 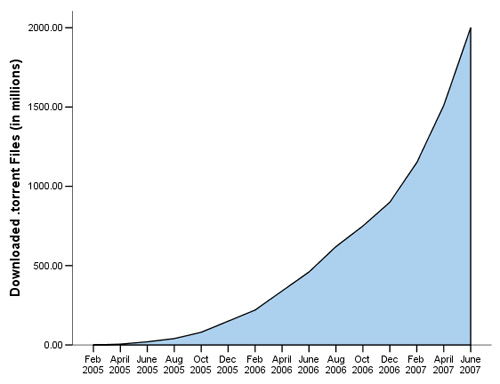