Most people sharing files on the Internet are aware that at any time they could be being monitored by any number of anti-piracy companies, investigators or lobby groups. There can be little doubt that file-sharing forums and sites around the world are being watched to a greater or less extent for the purpose of keeping tabs on piracy. And you can safely bet that the RIAA, IFPI and MPAA will read this article, just as you are.

But what if a throwaway comment about torrents via Twitter was enough to put a movie studio in direct contact with you in a matter of minutes? This is what happened to photographer, writer and Twitter user Amanda Music, as she wondered;

Ugh WHY IS ADVENTURELAND NOT ON TORRENTS YET?

Amanda told TorrentFreak, “My friends and I usually wait to download cams of movies. We have yet to find one for Adventureland. So I was Tweeting about it. My friends were too though, but I guess they didn’t put torrent & Adventureland in the same sentence.”

It seems these keywords were being monitored by Hollywood studio Miramax, presumably to find out quickly when their movie hits the web. But instead, Miramax actually responded to Amanda and asked her not to use BitTorrent to get the movie;

“Miramax found my Tweet through a search and told me not to do it. In a nice way,” Amanda told TorrentFreak. “I had already looked for the torrent and didn’t find one so I decided to reply and say that I wouldn’t download it. I was joking in a way.”

Amanda replied to Miramax, “Okay I won’t, JUST FOR YOU,” but to her surprise they responded again. 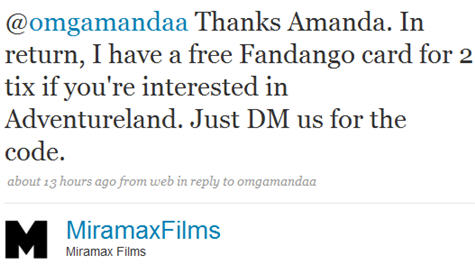 And Miramax were true to their word – almost. They provided Amanda with a code for a single free ticket and since Amanda is currently in New York City, she will go see Adventureland today.

“I was pretty surprised about it,” explained Amanda. “I couldn’t find a working Adventureland torrent anyway.”