In recent years, YTS.mx has become one of the most-used torrent sites, serving millions of visitors every day.

The site can be used without registering an account. However, those who sign up get some extra features, such as an option to bookmark titles. These added benefits can be handy but a few months ago we learned that they also come with risks.

At the start of the year, a group of movie companies filed lawsuits against alleged YTS users. In doing so, they relied on information that appeared to come directly from the YTS user database.

The timing of these lawsuits was interesting. They were filed around the same time the alleged operator of YTS signed a settlement deal with the same movie companies, agreeing to pay a substantial settlement fee.

This remarkable settlement allowed YTS to remain online. The movie companies, including the makers of films such as “Hellboy” and “Rambo: Last Blood,” demanded that the site removed their films, which is indeed what happened.

By targeting YTS users directly the filmmakers were looking for more settlements. Instead of merely targeting an IP-address they had more information too, such as an email address and a download history list, which presumably comes from the YTS database.

In one of these lawsuits, the defendant was recently identified as Mr. Mesot, a Hawaiian army veteran, who’s currently pursuing a degree in Electrical Engineering at the University of Hawaii.

While the rightsholders already had the man’s email address months ago, they still needed a subpoena to compel Internet provider Charter to give up a name. The ISP shared this information recently which allowed the movie companies to officially name Mr. Mesot as the defendant this month.

In addition to tracking the defendant’s IP-address through public torrent swarms, the amended complaint also shows a copy of user database information, which appears to come from YTS. 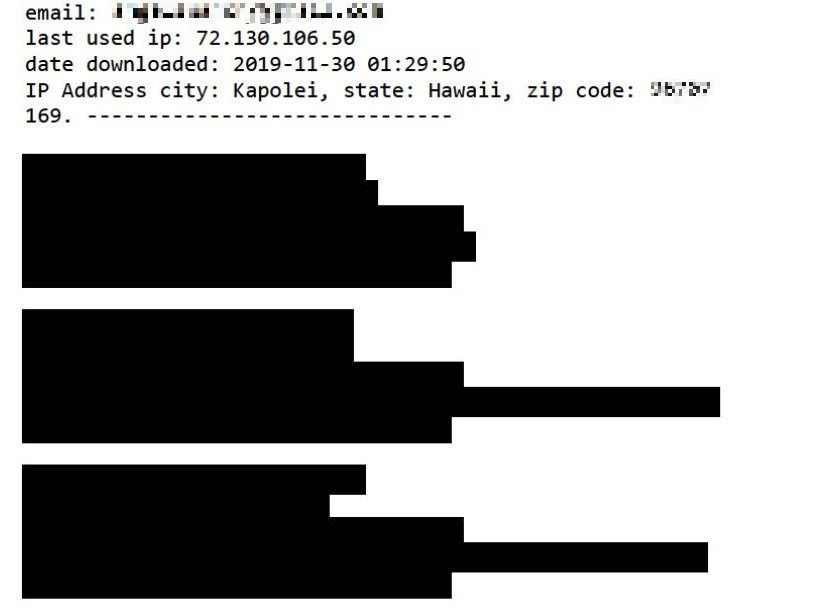 “As shown in Exhibit ‘4’, Defendant used the YTS account to download a torrent file associated with the Work Rambo V Last Blood from one or more computing devices under his control on Nov. 30, 2019 at 01:29:50 UTC,” the complaint reads.

YTS has never officially confirmed that it shared user information with the movie companies but based on the provided evidence, it certainly appears that way.

When we reached out to the site last week the operator didn’t have any further details on the alleged handover of data. However, YTS indirectly confirmed it by pointing out that users can wipe their download history and take other privacy precautions.

“As for the user’s privacy, they do not have to confirm their e-mail address,” YTS informed us, noting that the address is only needed to recover a lost password.

“Also, from their profile settings, they have the option to disable their own downloads history, if they wish,” YTS added.

We can confirm it’s entirely possible to sign up for a YTS account with a non-existent email address. Also, there is an option to disable the download history in the profile settings (only applies to future downloads). Removing an account doesn’t appear to be an option.

“It is very important for any user to use a commercial VPN to download torrents. It is a must. Otherwise, they have a lot of problems,” YTS noted.

While a VPN can indeed help, it can still lead to trouble when movie companies have access to private data. As we reported earlier this year, movie companies also sued a YTS user who was using a VPN.

In any case, signing up with YTS using an easily traceable email address doesn’t sound like a smart move.

A copy of the amended complaint naming Mr. Mesot as the YTS user who downloaded pirated content is available here (pdf)