The biggest score came a little over a year ago when he convinced the operator of YTS, one of the largest torrent sites, to settle with several movie companies for more than a million dollars in damages.

The echoes of those settlements are still heard in current lawsuits. As part of the agreement the operator of YTS shared information from the site’s database with the movie companies, which provided fuel for many follow-up cases.

The tactics of Culpepper and his clients, which include the makers of “Angel Has Fallen,” “Rambo V: Last Blood,” and “The Hitman’s Bodyguard”, are quite atypical.

Major Hollywood studios shy away from lawsuits against the general public and rarely sue pirate services. That’s not the case for these smaller independent studios, which are happy to put pressure on apps, sites, and even third-party services which they believe play a role in the piracy ecosystem.

For example, phone store Victra was sued more than once, Internet backbone provider Hurricane Electric was taken to court, and VPN provider LiquidVPN was targeted for alleged facilition of piracy.

Yesterday, another lawsuit appeared on our radar. In a complaint filed at a federal court in Virginia Culpepper, together with attorney Timothy Hyland, accuse PopcornTime.app, several of its users, VPN.ht (Wicked Technology), and hosting service Voxility of massive copyright infringement. 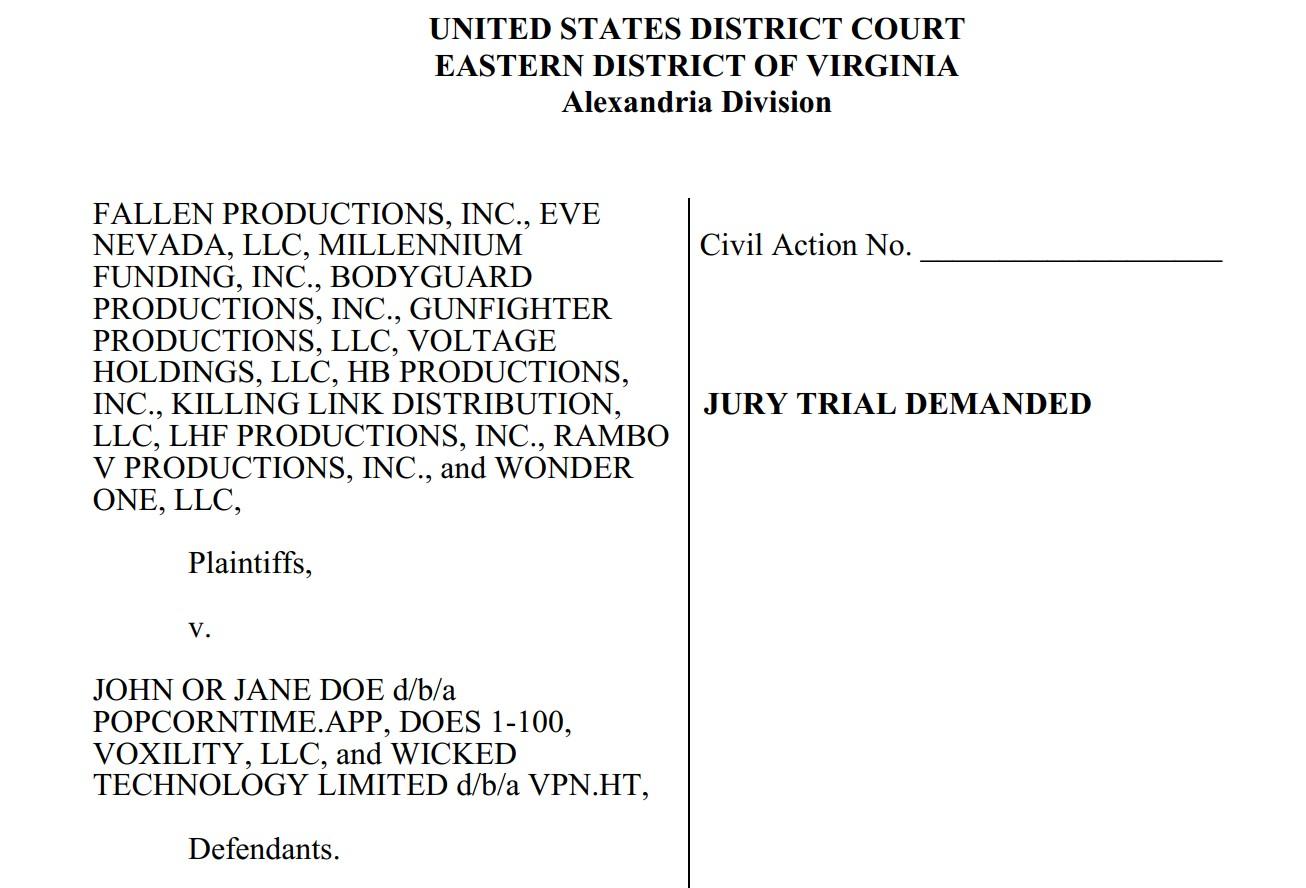 The plaintiffs include familiar movie companies such as Fallen Productions, Millennium Funding, and Voltage Holdings, who argue that the defendants all play a role in distributing pirated copies of their films.

“Massive piracy of these motion pictures on the Internet via peer to peer (‘P2P’) networks by customers of Internet Service providers (‘ISPs’) and data centers such as Voxility and Wicked and the willful failure of the ISPs to deal with this issue despite clear notice of it have hindered this opportunity,” the complaint reads.

Seeing the PopcornTime.app software and several pirating users as defendants is not a major surprise. The app has often been described as a piracy tool, even by the US Government, and the users were simply caught pirating through their IP-addresses.

In this case, these IP-addresses were linked to a VPN. This often makes the actual pirates impossible to identify, which is why the movie companies are going after VPN.ht and its hosting partner Voxility.

Voxility LLC is incorporated in the US and allegedly housed servers that were used by the VPN. While it’s a neutral intermediary, the movie companies argue that the company should have taken action when it received multiple takedown notices about infringing activity that took place over its network.

“Voxility continued to provide service to Wicked despite knowledge from at least the Notices that their customer Wicked was using the service to encourage Wicked customers to pirate copyright protected Works including Plaintiffs’ exactly as promoted, encouraged and instructed by Wicked,” the complaint reads.

Apart from sending takedown notices, the movie company attorneys repeatedly contacted Voxility to point out the infringing activities. One of the letters explicitly stated that Wicked promoted its VPN to be used in combination with Popcorn Time.

The hosting provider eventually agreed to terminate the account of VPN.ht. However, it took several months before that actually happened, the complaint alleges.

Voxility itself doesn’t promote the use of Popcorn Time but the movie companies accuse Hong Kong-based VPN.ht owner Wicked Technology of encouraging its subscribers to use the app.

The complaint lists various screenshots where VPN.ht mentions Popcorn Time, adding that a VPN helps “to avoid getting in trouble.” 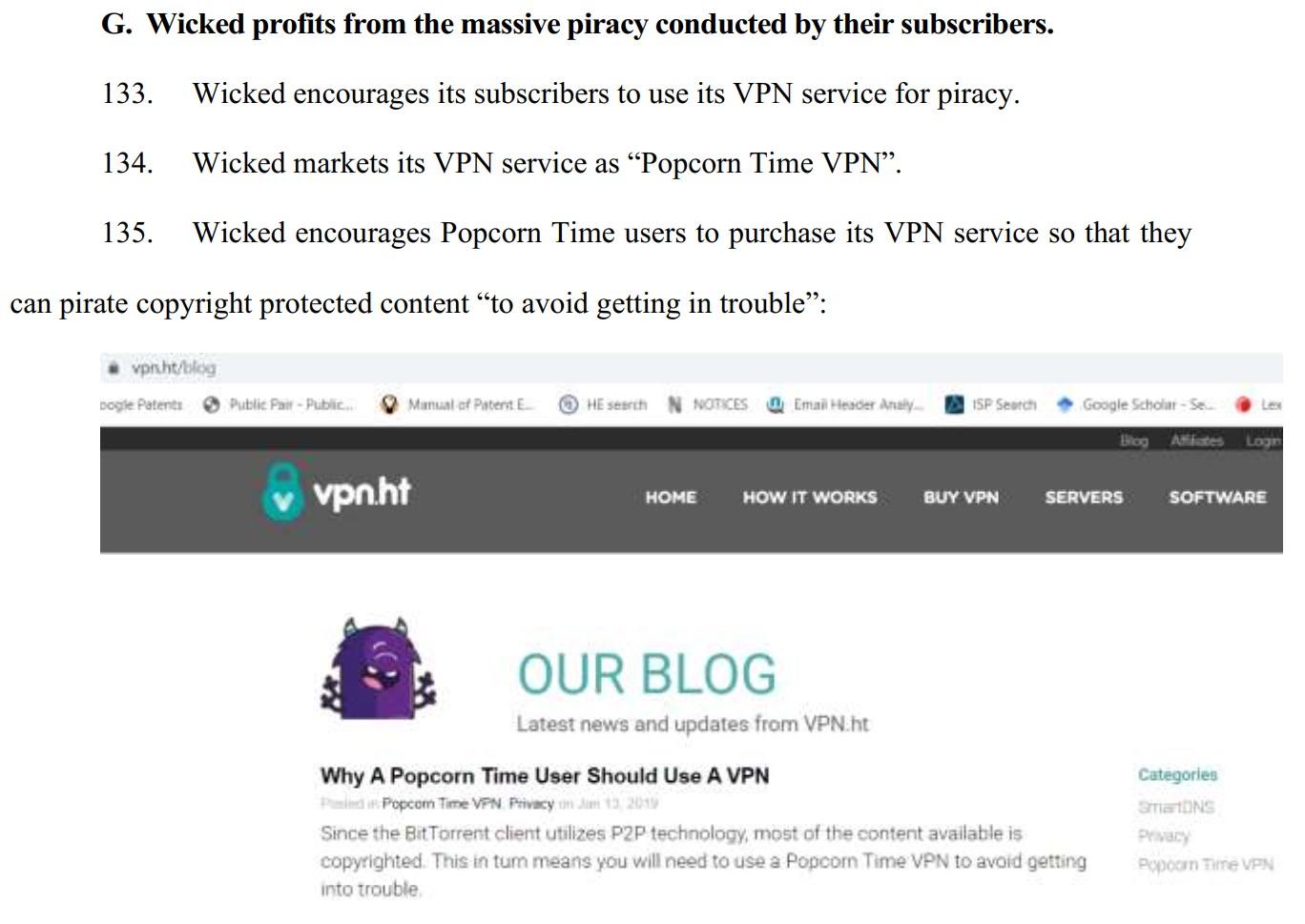 These comments were not limited to Popcorn Time. The service also has a landing page for users of the torrent site YTS, a popular source for pirated movies. 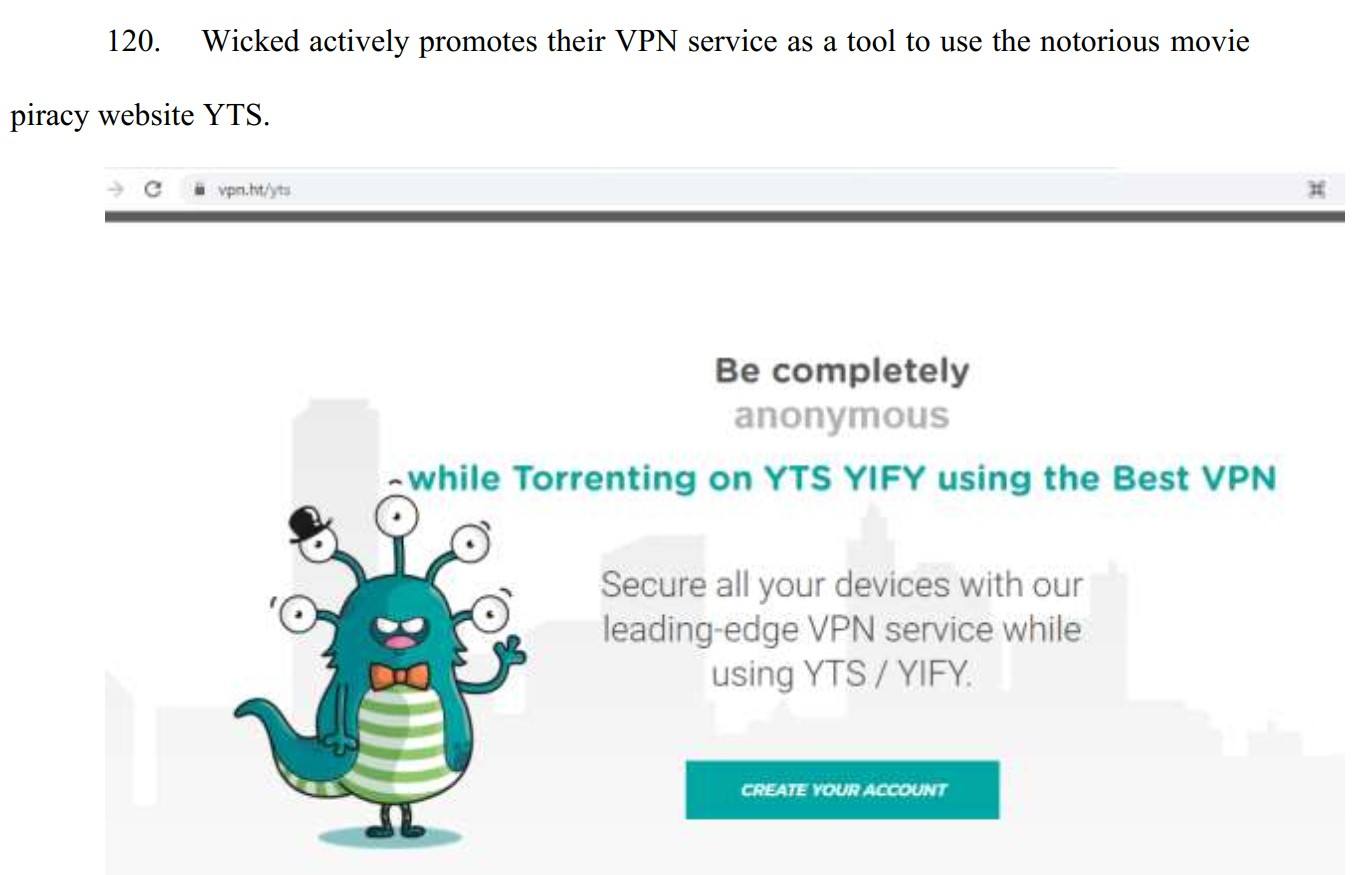 The movie companies note that based on this “encouragement” the users of VPN.ht installed piracy apps or visited torrent sites to download and share pirated films. The complaint doesn’t specify how IP-addresses were linked to actual Popcorn Time or YTS users.

Needless to say, these are serious allegations that have to be proven in court. Holding online service providers liable is far from straightforward and jurisdiction issues may arise as well.

That said, lawsuits are the ultimate pressure tool and recent history has shown that these movie companies are not averse to settling matters. As mentioned earlier, they settled with torrent site YTS, phone company Victra, and Hurricane Electric resolved matters behind closed doors too.

With regard to VPN.ht, the movie companies also hope to compel the company to identify the operator of PopcornTime.app, possibly through payments that were made between both parties.

When we look at the demands for damages and relief, there are striking similarities with the recently filed case against LiquidVPN.

In addition to halting any infringing activity, Wicked and Voxility also face demands to make it impossible for pirate sites to be accessed through their networks. In addition, the companies should block ports 6881-6889 on all servers, as these are commonly used for BitTorrent traffic.

These are unprecedented demands, to say the least, so we’ll keep a close eye on the lawsuit going forward.