Millions of people around the world use pirate apps on their mobile devices to stream TV-shows and movies.

In recent years copyright holders have tried to tackle the problem, both in and outside of court.

In a new lawsuit, filed at a Hawaiian federal court, Culpepper addresses another element of the piracy distribution chain. Representing Hunter Killer Productions, the attorney has filed a complaint against the phone store chain Victra.

The movie company accuses AKA Wireless and ABC Phones, who do business as Victra, of inducing and contributing to copyright infringement. Specifically, the complaint alleges that Victra employees promoted the piracy apps Popcorn Time and Showbox to customers.

“Defendants’ employees explained to their customers how to use the movie piracy apps installed onto the customers’ devices to infringe copyright protected content while the customers were at VICTRA stores.

“Defendants promoted the movie piracy apps to their customers to entice them to purchase particular products and thereby increase their profit,” Hunter Killer Productions claims.

The movie company mentions two instances where a Victra employee promoted a pirate app in store. This happened in Verizon-branded stores in El Paso, Texas, and Kahului, Hawaii. 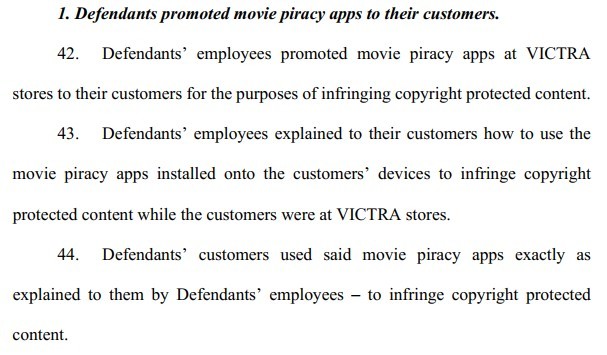 The complaint is supported by a declaration from a customer who was caught pirating. He mentions that an employee named Sabrina installed “Popcorn Time” on a tablet he bought. She also explained how to use it to watch free movies, without mentioning that it’s a piracy app.

As mentioned in the complaint, this is not the first time that Victra has been made aware of this issue. Two years ago, the phone store chain was sued by two other movie companies, which accused it (and its employee) of doing pretty much the same.

That case, which mentions the same alleged offense by an employee of the Kahului store, was eventually dismissed after a settlement was reached. The details of this agreement were not made public.

According to Hunter Killer Productions, Victra profited from the actions of its employees as they led to an increase in sales. The employees are not listed as defendants, but the movie company is holding the phone store liable.

“The intentional inducement and contributory infringement occurred within the scope of their employment,” the movie company writes, adding that Victra is therefore liable for these actions.

Hunter Killer Productions requests either actual damages or statutory damages, to compensate its claimed losses. However, considering the legal track record of the movie company, it is likely that this case will eventually be settled for an undisclosed amount.

A copy of the complaint filed by Hunter Killer Productions against Victra is available here (pdf).