Movie Company Has No Right to Sue, Accused Pirate Argues

In recent years, a group of select companies have pressured hundreds of thousands of alleged pirates to pay significant settlement fees, or face legal repercussions.

These so-called “copyright trolling” efforts have also been a common occurrence in the United States for more than half a decade, and still are today.

While copyright holders should be able to take legitimate piracy claims to court, not all cases are as strong as they first appear. Many defendants have brought up flaws, often in relation to the IP-address evidence, but an accused pirate in Oregon takes things up a notch.

Lingfu Zhang, represented by attorney David Madden, has turned the tables on the makers of the film Fathers & Daughters. The man denies having downloaded the movie but also points out that the filmmakers have signed away their online distribution rights.

The issue was brought up in previous months, but the relevant findings were only unsealed this week. They show that the movie company (F&D), through a sales agent, sold the online distribution rights to a third party.

While this is not uncommon in the movie business, it means that they no longer have the right to distribute the movie online, a right Zhang was accused of violating. This is also what his attorney pointed out to the court, asking for a judgment in favor of his client.

“ZHANG denies downloading the movie but Defendant’s current motion for summary judgment challenges a different portion of F&D’s case: Defendant argues that F&D has alienated all of the relevant rights necessary to sue for infringement under the Copyright Act,” Madden writes.

The filmmakers opposed the request and pointed out that they still had some rights. However, this is irrelevant according to the defense, since the distribution rights are not owned by them, but by a company that’s not part of the lawsuit.

“Plaintiff claims, for example, that it still owns the right to exploit the movie on airlines and oceangoing vessels. That may or may not be true – Plaintiff has not submitted any evidence on the question – but ZHANG is not accused of showing the movie on an airplane or a cruise ship.

“He is accused of downloading it over the Internet, which is an infringement that affects only an exclusive right owned by non-party DISTRIBUTOR 2,” Madden adds.

Interestingly, an undated addendum to the licensing agreement, allegedly created after the lawsuit was started, states that the filmmakers would keep their “anti-piracy” rights, as can be seen below. 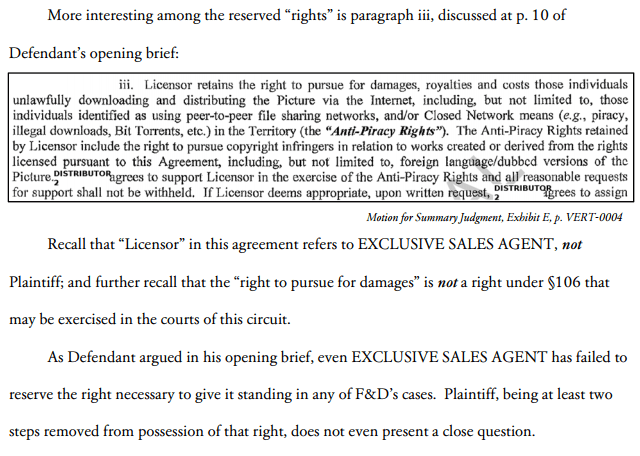 This doesn’t save the filmmaker, according to the defense. The “licensor” who keeps these anti-piracy and enforcement rights refers to the sales agent, not the filmmaker, Madden writes. In addition, the case is about copyright infringement, and despite the addendum, the filmmakers don’t have the exclusive rights that apply here.

“Plaintiff represented to this Court that it was the ‘proprietor of all copyrights and interests need to bring suit’ […] notwithstanding that it had – years earlier – transferred away all its exclusive rights under Section 106 of the Copyright Act,” the defense lawyer concludes.

“Even viewing all Plaintiff’s agreements in the light most favorable to it, Plaintiff holds nothing more than a bare right to sue, which is not a cognizable right that may be exercised in the courts of this Circuit.”

While the court has yet to decide on the motion, this case could turn into a disaster for the makers of Fathers & Daughters.

If the court agrees that they don’t have the proper rights, defendants in other cases may argue the same. It’s easy to see how their entire trolling scheme would then collapse.

The original memorandum in support of the motion for summary judgment is available here (pdf) and a copy of the reply brief can be found here (pdf).