During the last decade the issue of so-calling ‘camming’ – taking a video recording device into a theater and filming the screen – grew out to the point where almost every major movie was online before its official release. Groups like maVen turned the act into an art form, turning out the latest movies in record time and with unprecedented quality.

In more recent times, however, the trend has been showing signs of reversal. These days cammed movies only make up less than 5% of the top 100 most downloaded movies and at this week’s CinemaCon 2012 convention, MPAA chief Chris Dodd said that instances of camcorder recordings had dropped by some 50% since 2007. “Almost all of this is due to your vigilance,” he told the NATO audience.

In several speeches since he took on the role of MPAA chief, Dodd has stressed that the absolute best way to watch movies is “in theaters, in the dark, on the big screen,” and millions of movie-goers agree with him. Unfortunately some of NATO’s MPAA-mandated approaches to combating camcorder piracy have sullied that experience.

Bag searches, pat downs, metal detectors, cell-phone confiscations, and even night vision goggles, have turned movie screenings (particularly early ones) into an experience more akin to that of a post 9/11 airport check-in than a relaxing evening out. But according to a presentation that took place yesterday at CinemaCon, all this has the potential to become a thing of the past.

PirateEye was developed with funding from Motion Picture Laboratories, Inc. (MovieLabs), a non-profit research organization funded by the major Hollywood studios. In development since 2006 and in new hands since 2010, $5m is said to have been invested in the technology to date.

The system involves the installation of cameras in theaters that scan the audience and have the ability to detect the lenses of camcorders and cellphones. PirateEye also records what it sees and retains “forensic quality” evidence for prosecutions. 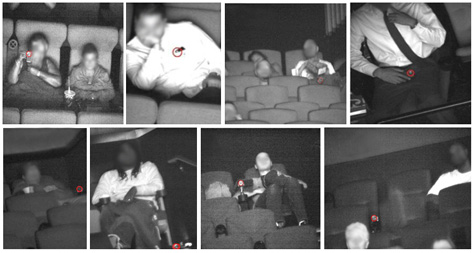 While perhaps the natural reaction is to be concerned about yet more invasions of privacy in the name of protecting Hollywood, the people behind the technology say it is no more intrusive than other CCTV systems people encounter on a daily basis. They even say it could lead people to feel more comfortable.

“The purpose of PirateEye is to not have another person look at you suspiciously if you haven’t done anything wrong,” said Brian Dunn, chief executive officer of PirateEye. “If the cameras don’t catch a person trying to tape a film illegally, the images are destroyed.”

But it seems that PirateEye has more uses than simply cracking down on movie piracy. Earlier this week CinemaCon managing director Mitch Neuhauser revealed that someone had been detected at the convention not for partaking in movie piracy per se, but for recording Paramount’s presentation to exhibitors. That individual was apparently arrested and taken away by the police.

Finally, in his speech to the convention, Chris Dodd praised NATO for scheduling sessions on how to engage movier-goers through social networking, but interestingly one of the stated aims of the PirateEye system is to cut down on ways film fans might choose to promote their experiences with each other. In addition to curbing full-film professional piracy, their technology also aims to deter “social piracy” – the casual recording, storage, sharing of movie clips online.

According to its creators, thus far the system has already resulted in more than ten arrests and prosecutions in the U.S. However, thanks to aggressive US legislation, the uncompromising attitudes of theater staff, and the lack of discretion they are encouraged to show to anyone recording any part of a movie, Pirate Eye will suck in professional pirates and innocents alike.