Movie Studio Goes After Self-Proclaimed Pirate, His Unicorn and Leprechaun 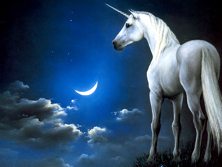 In January we reported on the movie outfit Liberty Media that wants file-sharers to hand themselves in and pay $1000.

“Despite the fact that these people are stealing from us, we wanted to give them a chance to admit their mistakes and move on,” said Brian Dunlap, COO of Liberty Media subsidiary Corbin Fisher at the time. “Therefore, we are offering this limited period where we will resolve these cases quickly and cheaply.”

The scheme, miraculously, appeared to work and random strangers reportedly started to pay up. However, Corbin Fisher also received an email of a different kind, one that needed some deeper thinking to decrypt.

After reading all the drama that had unfolded, TorrentFreak reader Ryan decided to contact Corbin Fisher to tell them what he thought of their actions.

“I have been sharing a whole load of your files… on every torrent site like PureTna, Kickasstorrents etc. I am very sorry for doing so and would like to pay you the $1000 for amnesty…,” he began in his email.

What appeared to be another $1000 in the can for the movie company turned out to be something different, something special. Ryan explained in his email that the money would come from the pot of gold he got from the leprechaun at the end of the rainbow.

And it got even weirder after that. 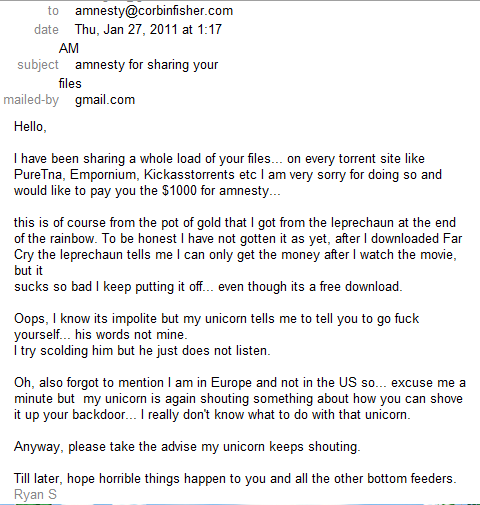 “I figured I would get a few laughs from it and sent them the email – I clearly mentioned I was in Europe to make them feel more frustrated,” Ryan told TorrentFreak when explaining his actions.

Unfortunately for Ryan, the prank didn’t solicit the response he had hoped for. Corbin Fisher failed to reply, at least via email, but a few weeks later they responded in an altogether unexpected fashion – by instructing their legal counsel to take action.

After a month Ryan eventually received an indirect response to his email, from Google.

“Google has received a subpoena for information related to your Google account in a case entitled Corbin Fisher: Identification of Does 1-500,” Google’s legal team wrote to Ryan last week.

Corbin Fisher had demanded that Google should hand over information, including but not limited to IP-addresses associated with the account, that could identify the person linking to the Gmail account Ryan’s email was sent from.

Apparently, Corbin Fisher decided to ignore the unicorn, leprechaun and the fact that Ryan clearly stated that he lives in Sweden. They focused instead on the ‘confession’ and decided to take action and subpoena Google for the personal details.

Ryan was surprised by the response, to say the least, and decided to call Corbin Fisher’s legal counsel to find out why he was mentioned in relation to a case he had nothing to do with. To his surprise, he was told that they had taken the confession seriously and are determined to hunt him down, all the way to Sweden if need be.

Whether these threats are as serious as the lawyer says they are remains to be seen, but the personal details were handed over by Google yesterday.

Although it may seem strange that it’s so easy to ask for someone’s personal details and IP-addresses, a copyright lawyer informed TorrentFreak that it’s not uncommon.

“Discovery (evidence gathering) allows for the acquisition of literally anything relevant to the suit as long as it is not protected by some kind of privilege,” we were told. “It is often a wake-up call to people when they learn that they likely do not have a reasonable expectation of privacy in e-mails or information stored on a third-party server.”

The big question is, what will Corbin Fisher do with the information received from Google?

If Corbin Fisher’s intent was to scare the sender of the email, then this tactic has failed. Ryan has little to hide, has never downloaded any of Corbin Fisher’s content, and doubts that his unicorn and leprechaun will be summoned to court. The only thing that he got out of it is that lawyers have no sense of humor, and that future pranks should not be sent via a third party’s email address.