The blocks are effective, at least in preventing subscribers from accessing the domains directly, but that doesn’t mean that the sites are completely inaccessible.

With every site that is added to the blocklist, several reverse proxies are launched. These proxy sites give people access to the blocked sites and effectively bypass the restrictions that were put in case by the court.

TV-torrent site EZTV is the latest target of the UK blocking spree. The Motion Picture Association (MPA) and FACT applied for a court order to render the site inaccessible and at the end of July UK providers complied.

At the same time, however, several EZTV proxies popped up. In addition, EZTV redirected UK visitors to a special landing page with instructions on how to circumvent the blockades, although this was soon blocked as well.

Needless to say, the movie studios are not pleased with the proxies and TorrentFreak learned this week that they have asked the Internet providers to block these too.

A few days ago eztvproxy.net and eztv.dashitz.com became inaccessible on several ISPs and anti-piracy group FACT confirmed that they are behind these recent changes.

“We have notified some proxies,” FACT informed TorrentFreak after we inquired about the blocked sites. 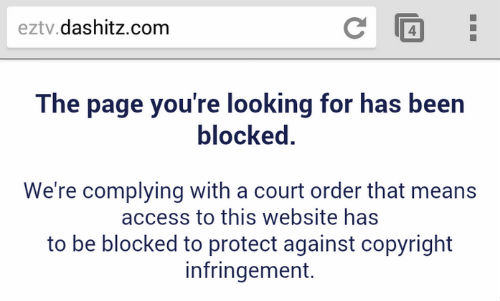 The new proxy blockades are currently live on BSkyB, BT and O2 and the other providers are expected to follow suit. Previously, the music industry applied for a similar expansion blocking several proxies pointing to The Pirate Bay, H33t and KickassTorrents.

The full range of sites added during the latest update remains a mystery for now – neither the movie studios nor the ISPs make these public.

The question remains, however, how effective these new blockades will be. There are still many alternative proxies up and running and with every one that’s blocked, new sites will appear.

It’s possible that the movie industry hopes people will eventually grow tired of finding alternatives and give up. In line with this strategy, FACT told TorrentFreak that they will ask the court for additional orders in the future to block more infringing sites.

“We have made it clear that we will seek action against sites that continue to provide unremitting mass access to infringing content following due legal process,” FACT said.

Update: Movie streaming site movie4k.to also appears to be added to the blocklist.