If you travel north and slightly to the west of the UK you’ll eventually arrive at the little island of Iceland. It has a small population of around 320,000 and became an international financial nightmare in 2008 when its entire banking system collapsed.

Five years on things are really improving, but the same cannot be said about its citizens’ access to international media products.

For reasons best known to Apple, Icelanders have no access to iTunes. In fact the company doesn’t directly sell iPhones to Iceland so people have to obtain them through resellers. If locals want access to content through Netflix and even Amazon, well, they can think again.

Of course, faced with this dearth of availability it comes as little surprise that there are plenty of services around that seek to solve the problem. Googling “VPN Iceland Netflix” produces dozens of results from international outfits but it is a new product from a local company that’s currently causing waves.

The product is the brainchild of Icelandic telecoms company Tal, who are now offering what they call their Lúxusnet package. Among other things it allows customers to access sites outside Iceland by exchanging a local IP address for an international one.

“We want an Internet that is open and accessible to all, no matter where in the world they are born or residing. We want things to be simple and easy to use so that you can do what you really want. Therefore, we have added a little luxury to your network,” the company explains. 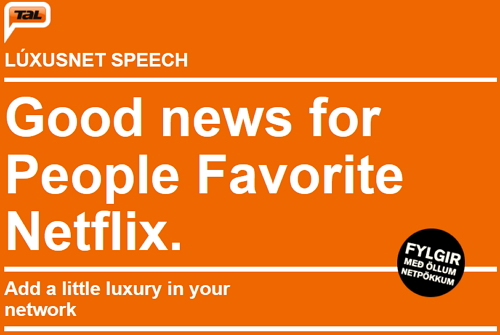 While Icelanders will no doubt be pleased at the prospect of accessing content from services such as Netflix and Hulu, a local anti-piracy outfit has rather a different attitude.

Founded 20 years ago, the MPA-affiliated Association of Film Rights-Holders of Iceland (SMÁÍS) represents the interests of local and international movie companies. It says that the service being offered by Tal is illegal. Tal, on the other hand, think that they are offering a tool and how that tool is used is down to the user.

“The use of foreign content providers and websites is always the responsibility of the customer,” said Tal director Petreu Ingileifar Guðmundsdóttur in a comment.

According to the anti-piracy group, this attempt at shifting liability away from the ISP and onto the customer simply doesn’t wash.

“This argument does not hold, either morally or legally, in our opinion,” says SMÁÍS general manager Snæbjörn Steingrímsson. “In fact, we hear this exact same argument about torrent-sites.”

SMÁÍS insist that Tal’s product (and another similar one offered by Flix.is) are tools designed to circumvent technical measures (in this case geo-blocking mechanisms) put in place to protect copyright, which are illegal under local law.

“We are very surprised that a great company such as Tal is offering this sort of thing, but we will challenge them and Flix.is too,” Snæbjörn says.

According to local media SMÁÍS will try to get Tal to cooperate but in parallel preparations are being made to take the case to the police.

“This is like saying people can buy contraband goods legally as long as they come to this country legally,” Snæbjörn concludes. “There is no commercial or other economic activity in Iceland that could survive against such competition.”

It is of course interesting that SMÁÍS cites circumvention issues as the basis for its complaint but ends up talking about competition.

One of the anti piracy group’s most prominent members is a company called 365 Media, who just happen to be Iceland’s largest television, radio and publications giant. For a company that supplies movies to locals at premium prices, the prospect of competition from Netflix and Hulu at much more competitive U.S. rates will no doubt be proving less than attractive.

Hulu Tracks Pirates to Decide What to Buy