Nearly all VPN providers promise some form of anonymity, but if push comes to shove there are significant differences in how people’s personal information is protected.

For example, some VPN providers are required by law to keep logs and can be compelled by court to hand these over. Needless to say, whistle-blowers and activists are at risk of being identified by these services.

To increase transparency TorrentFreak previously asked several of the most prominent VPN service providers about their logging policies. With this information prospective users are able to make a more informed decision before they sign up.

However, this is just a start and VPN providers should take additional steps to gain more trust. The Seychelles based VPN provider Proxy.sh has taken an important step in the right direction with the launch of its very own transparency report.

Last month Proxy.sh appeared in the news after it started monitoring one of its users based on a complaint from a third-party. The user’s alleged actions violated the “ethical policy” of the provider which all users agreed to when they signed up.

One of the critiques against Proxy.sh’s decision was that the process lacked transparency. The company did inform users about the temporary logging, but details about the alleged offense weren’t posted. Responding to this, Proxy.sh is now the first VPN provider to openly publish all data and takedown requests it receives, as well as the action it takes in response.

“This section provides absolutely all the notices we receive either from third-party or the justice of Seychelles, as well as a precise description of the actions we take in response to them,” the company announces.

The first notices were posted before the weekend, and thus far all requests deal with the alleged distribution of pirated content. For example, yesterday Proxy.sh received a DMCA notice from HBO for a Game of Thrones episode that was shared through the IP-address 173.255.143.218.

Proxy.sh doesn’t keep logs, so it can’t forward the notice to the user in question. Instead, the VPN provider closed the port (56854) that was used to transfer the file. 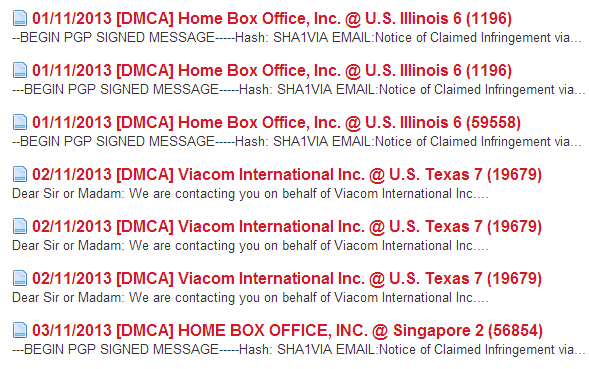 With its transparency report Proxy.sh hopes to inform its users how the company responds to various abuse notifications and user data requests.

“We hope that by providing such transparency report, you will be able to adjust your usage but also make sure you are not being tracked by behind-the-scene interventions. We have always been clear: we will never collaborate with third-party if this involves providing data about you unless you do activities harmful to human beings,” the company notes.

Proxy.sh is to be applauded for taking the lead on this front, and we encourage other VPN providers to follow suit.