For years file-sharers in Norway have had somewhat of an easy rise after it was determined in 2011 that the only entity allowed to monitor and collect data on P2P networks would not longer be permitted to do so.

By May that same year it became clear that the government wouldn’t stand idly by, with a Ministry of Culture announcing amendments to the country’s Copyright Act. The promise was that movie and record companies would be given “the tools they need” to tackle infringement.

On July 1 the new law was passed and along with it a framework that would allow any rightsholder or trade group to spy on file-sharers providing they inform the data inspectorate in advance. After a somewhat slow start, copyright holders are now getting themselves organized and are almost ready to start.

The MPA, the international branch of the MPAA, and its associates including the Norwegian Videograms Association, Norwegian Association of Film Distributors, and the Norwegian Society of Composers and Lyricists, are among the organizations that have recently advised the inspectorate that their monitoring will soon begin.

Of course, all the data gathered will need to be subsequently handled and processed. That task will be carried out by the infamous pirate-hunting lawfirm, Simonsen. 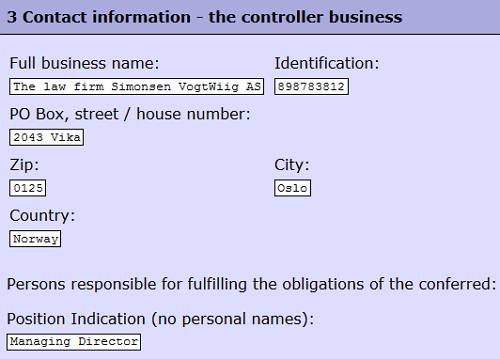 According to Rune Ljøstad, a partner at Simonsen, the project will begin in just over three weeks.

“From 29 November we will be able to process personal data for [the purpose of tracking file-sharers],” Ljøstad explains.

As can be seen from the excerpt from Simonsen’s notification below, the aim of the exercise is to protect the MPA and its members.

Ljøstad, meanwhile, has been explaining that uploaders will be the MPA’s key target.

“Our goal is that most of the uploads and downloads stop and people instead go over to legal alternatives,” Ljøstad told Tu.no.

“To achieve this goal you have to prioritize what is most important. Typically licensees are affected more by uploads than downloads. An upload can provide the basis for 1,000 downloads, while one download is just one download,” he said.

But despite the assurances that this will be an effort aimed at the ‘worst’ offenders, there is a key problem. It is virtually guaranteed that BitTorrent users will be the first targets of the new crackdown and by the protocol’s very nature, every downloader is also an uploader. This effectively puts most of Norway’s file-sharers under the microscope.

The MPA’s next move remains unclear, but several scenarios come to mind. Although it will already be in possession of the data having harvested it from abroad, initially the MPA will suck up as much Norwegian file-sharing data as possible so it can be used officially in local procedures.

That data will be used in several ways. It’s possible that a few hand-picked unlucky individuals will be singled out for punishment, but it seems more likely having come this far that the data will be used for more broad action. There are two likely candidates.

First, the data could be used to justify a letter-writing or “three strikes” style regime, something all rightsholders have expressed an interest in.

Second, the data could be used to show how bad the piracy situation is in order to obtain court orders to have sites like The Pirate Bay blocked at the ISP level. There are already provisions in the new law to block sites and rightholders have signaled they’re ready for it, so expect this outcome sooner rather than later.