MPAA and RIAA Teach Copyright in Elementary Schools, Now With Fair Use 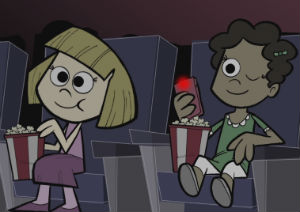 Almost a year ago we questioned a new initiative from the Center for Copyright Information (CCI).

The group, which has the MPAA and RIAA as key members, had just started piloting a kindergarten through sixth grade curriculum on copyright in California schools.

The curriculum was drafted in collaboration with the California School Libraries Association and iKeepSafe, who aim to teach kids the basics of copyright. The lesson materials were rather one-sided, however, often ignoring fair use and the free-to-share copyright licences Creative Commons provides.

These concerns were later picked up by the mainstream press, creating a massive backlash. Responding to the critique the CCI and other partners were quick to state that it was just a pilot and that the final materials would probably be more balanced.

Glen Warren, vice president of the California School Library Association, acknowledged the problems and suggested that the early drafts were coming straight from the content industry.

“We’re moving along trying to get things a little closer to sanity. That tone and language, that came from that side of the fence, so to speak,” Warren commented.

This week, TorrentFreak spotted the final version of the curriculum and it’s clear that the public outcry for more nuance has paid off.

Instead of focusing on enforcement and the things people can’t do with copyrighted content, it now emphasizes that sharing can be a good thing. Creative Commons licenses are discussed in detail and every lesson plan also informs students about fair use.

For example, in the old second grade lesson plan the teacher was supposed to say the following sentence:

“You’re not old enough yet to be selling your pictures online, but pretty soon you will be. And you’ll appreciate if the rest of us respect your work by not copying it and doing whatever we want with it.”

While the above paragraph ignores the fact that some people are happy to share their photos with flexible Creative Commons licenses, it has been completely removed from the final version.

The sentence “we recognize that it’s hard work to produce something, and we want to get paid for our work” has been completely stripped from the lesson plan too. Instead students are reminded that “the projects they created are fun / informative / respectful, and so they may want to share them online.”

The sixth grade lesson material has also been thoroughly updated, as well as the accompanying video which doubled in length to explain fair use.

The changes become clear by comparing the old “purpose” and “key concepts” with the new one. Below is a copy of the old text, with no reference to fair use and Creative Commons licenses. 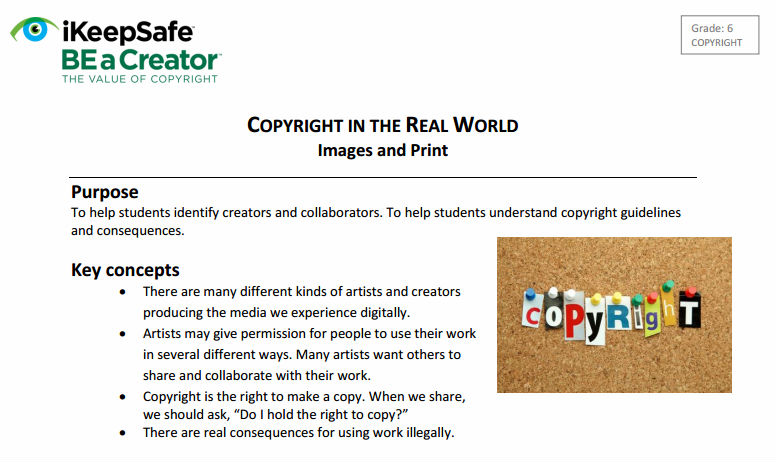 And here’s the new and improved version, with these two concepts included, and without the strong focus on consequences for “illegal use.”
New 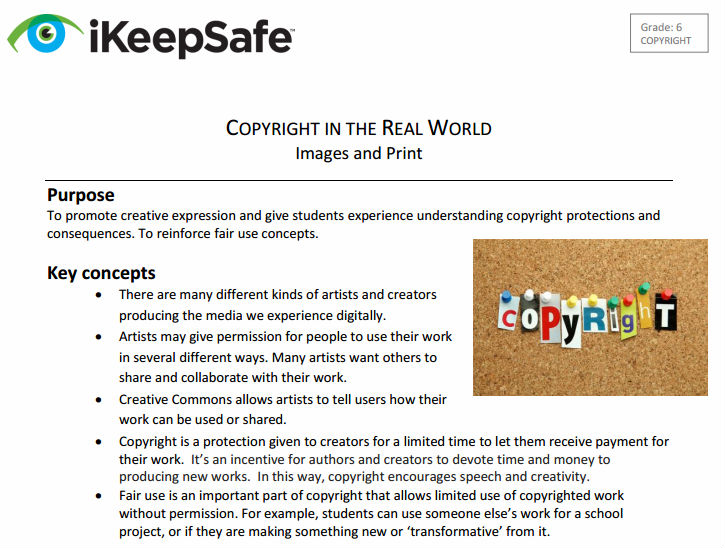 Another positive change is that instead of warning students against using copyrighted images and music from the Internet in Powerpoint presentations, they are now told that this is totally fine, as long as the material is only shown in class.

Similar changes have been made throughout the entire curriculum, which is now much more balanced than the rather strict and biased view that was presented before.

There’s still one question that lingers in the back of our mind though. Would the curriculum have been as balanced as it is right now if we hadn’t pointed out the problems in the first place?