MPAA: BitTorrent is the Best Way to Pirate Movies and TV-Shows

Nearly a month ago the six-strikes anti-piracy system was launched in the United States by the Center for Copyright Information (CCI), but aside from a traffic boost at VPN providers and proxies, we haven’t heard much about it since.

Earlier this month several people connected to the CCI presented their plans before the Congressional Internet Caucus Advisory Committee. Present were CCI’s Executive Director Jill Lesser, plus representatives from the MPAA, RIAA, Verizon, AT&T and the advisory board.

The most interesting part of the hearing was a presentation from MPAA Senior Vice President Marianne Grant on the evidence collection methods. Grant explained in detail how BitTorrent users are tracked and how the MPAA makes sure that copyright alerts go out to the right subscribers.

According to Grant the MPAA focuses mostly on BitTorrent because that is by far the best way for P2P file-sharers to download movies and TV-shows.

“The thing about BitTorrent is that it’s very efficient at dividing large files up into small pieces and assembling them very quickly on the user’s computer. For film and television it’s by far the best way to get what you want, if you’re interested in that,” Grant says in her intro.

BitTorrent is BY FAR the best…

Grant moves on to explain that the MPAA provides a list of movie and TV-show titles to the tracking company MarkMonitor (DtecNet). This list mostly includes recent and upcoming releases. The tracking company then searches for pirated files on torrent sites.

Every file that’s tracked is downloaded at least once for verification, and someone at MarkMonitor views the video to confirm that it’s the content they’re after. 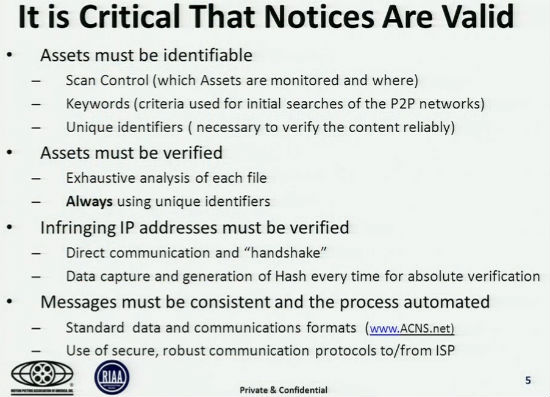 Grant stresses that it’s vital that both the infringing content and the downloader are accurately tracked.

“We don’t want to send a single notice that isn’t a valid notice. We want to make sure that every single one of them is supported by evidence and a robust communication methodology that makes sure that someone couldn’t come from left field, and send one and pretend to be us,” Grant says.

In the case of the alleged infringer this means that the tracking company actively communicates with the alleged pirate to make sure that this connection is indeed sharing the file. 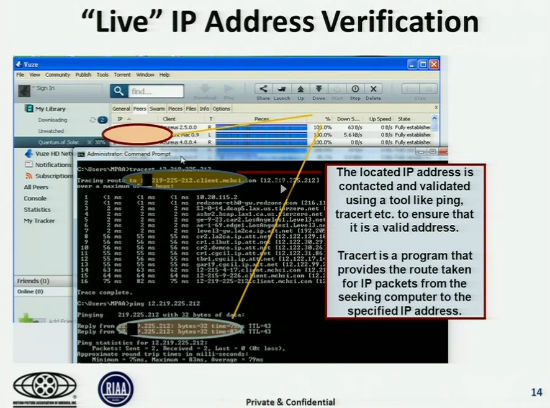 When the tracking company has verified the content and the downloader, all evidence is packaged and sent to the Internet Provider. The ISP then forwards a copyright alert to the subscriber whose connection was used to share the pirated file. 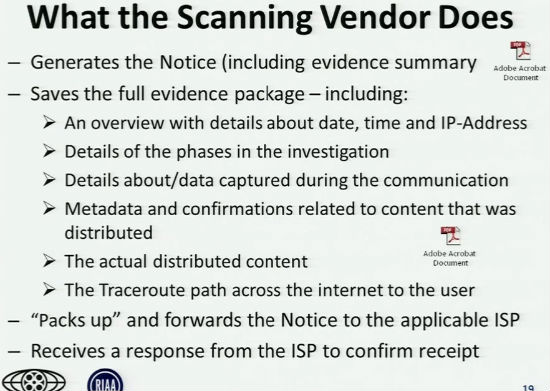 It is clear that the MPAA is doing all they can to prevent false positives. Their methodology is far better than that employed by copyright trolls for use in their lawsuits, but of course that doesn’t mean that there will be no false positives at all.

Time will tell how accurate the system is.

Thus far we haven’t received any reports of wrongful accusations. In fact, there are very few reports of people receiving a copyright alert at all, which could suggest that CCI is rolling out slowly.

For those who are interested, the full hearing is available on C-Span with Grant’s presentation starting at 25 minutes.