Over several years the Canada-based torrent index BT-Chat has grown to become one of the most popular among TV and movie fans.

The site was founded over a decade ago and has been running without any significant problems since. Starting a few days ago, however, the site’s fortunes turned.

Without prior warning or an official explanation the site went offline. Instead of listing the latest torrents, an ominous message appeared with a broken TV signal in the background.

“Error 791-the internet is shutdown due to copyright restrictions,” the mysterious message read. 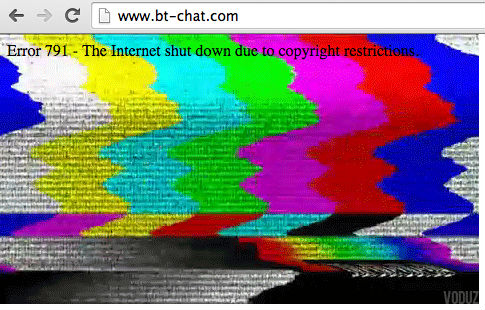 Initially is was unclear whether the message hinted at hosting problems or if something more serious was going on. Many of the site’s users hoped for the former but a BT-Chat insider informs TF that the site isn’t coming back anytime soon.

The site’s operators have decided to pull the plug after receiving a hand delivered letter from the Canadian MPA, which acts on behalf of its American parent organization the MPAA.

In the letter, shown below, Hollywood’s major movie studios demand that the site removes all infringing torrents.

“We are writing to demand that you take immediate steps to address the extensive copyright infringement of television programs and motion pictures that is occurring by virtue of the operation of the Internet website www.BT-Chat.com.” 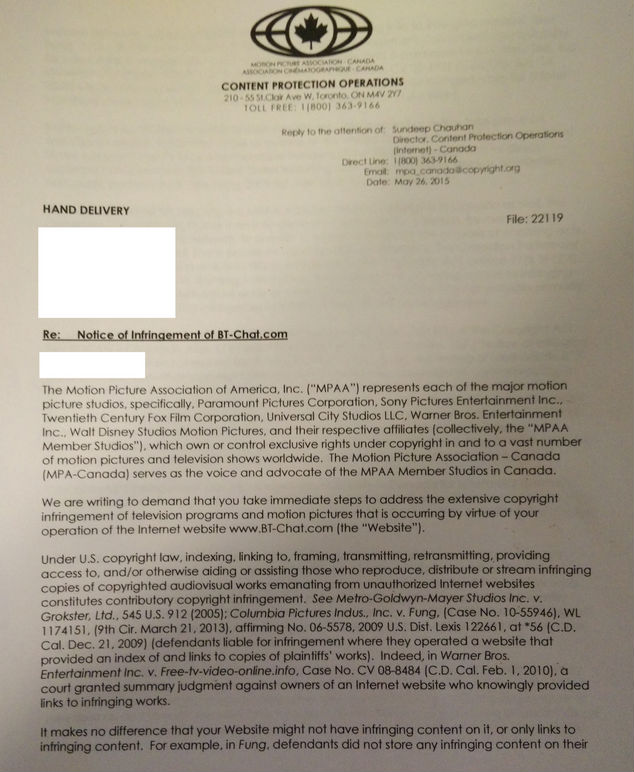 The MPAA makes its case by citing U.S. copyright law, and states that linking to unauthorized movies and TV-shows constitutes contributory copyright infringement.

Referencing the isoHunt case the movie studios explicitly note that it’s irrelevant whether or not a website actually hosts infringing material.

The threats from Hollywood have not been taken lightheartedly by the BT-Chat team. While giving up a site that they worked on for more than a decade is not easy, the alternative is even less appealing.

In the end thry decided that it would be for the best to shut the site down, instead of facing potential legal action.

And so another popular site bites the dust…