Over the years we have published dozens of articles on the reasons why people choose to pirate media. Time and time again “availability” comes out as one of the main motivations in both surveys and anecdotal reports.

Yesterday David Pogue highlighted this issue in Scientific American by pointing out that Hollywood is encouraging piracy by failing to make their content widely available online. The MPAA took offense at this stance and were quick to reply on their blog.

“[The article] echoes a very common argument about online digital theft: that if more movies and TV shows were available legitimately online, the problem of online content theft would take care of itself. The problem with this argument is that it’s not borne out by the facts,” the MPAA’s Howard Gantman writes.

Both Pogue and the MPAA refer to TorrentFreak’s list of the Top 10 most pirated movies of 2011 to defend their case. Pogue notes that none of these titles are available for “rent”. The MPAA on its turn argues that many of the titles are available to “watch instantly online.” So who is right?

Looking at Amazon, one of the most prominent video streaming services, we see that none of the top 10 movies can be rented, backing up Pogue’s claim. In fact, more than half (6) of the titles cannot be watched online “instantly” at all in the U.S. The four titles that are available have to be bought. 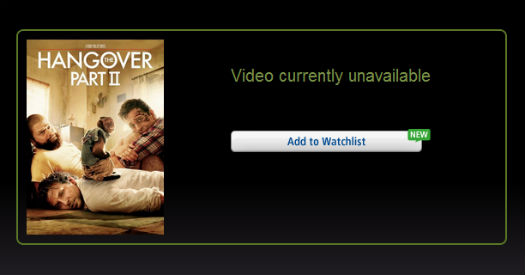 No matter how it’s spun, availability is more of an issue than the MPAA leads us to believe, and one that only gets worse when we look outside the U.S.

For example, the MPAA mentions that “Fast Five” is available for streaming via HBO Go. However, not in Europe where I have to pay nearly $19 a month for HBO Go so I can watch Game of Thrones legally.

But let’s forget about the top 10 of 2011 and move on to more recent titles. For some reason many of the recent releases, such as The Dictator, initially appear available for rent. Amazon kindly informed me that I could rent the film for $3.99, but this turned out to be false promise.

When I clicked the “rent now” button I got the following notice. 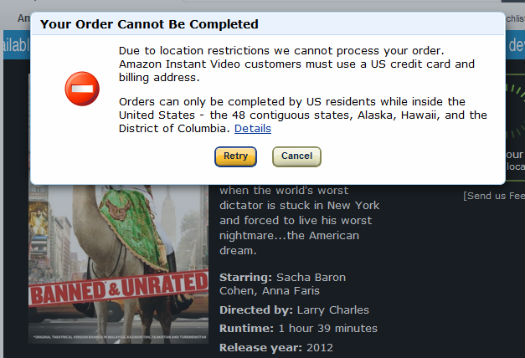 Unfortunately this is a very common experience for consumers outside of the United States, where the availability of movies and TV-shows is shockingly low. While that’s no justification to start pirating content, the MPAA is showing utter contempt for millions of legitimate consumers by downplaying the issue.

Continuing the spin, the MPAA argues that availability plays a minor role in countering piracy.

“Pogue’s thesis is that people choose to download content illegally when it’s not available to them in a legal format. He cites the availability of music on iTunes and TV shows on Hulu as evidence. But, as we know, digital theft of music and TV hasn’t stopped – in fact, it’s increased,” Gantman writes.

Wrong. Music piracy is dying off, just ask the RIAA.

Of course, there are many reasons why people pirate and there will always be freeloaders who simply can’t or don’t want to pay. But this is no reason to offend those who have the right intentions.

Making content available may not make piracy disappear, but at the very minimum it gives the millions of people who want to do the right thing a place to spend their money.