Traditionally the movie industry has relied on geographical licensing deals through which movie and TV-show rights are sold to separate parties in various countries.

As a relative newcomer to the business, Netflix’s vision is to do things differently. The company’s aim is to make as much content available globally as it can and is developing several movies and TV-shows in-house to advance this mission.

With this in mind, one would think that geographical copyright restrictions are no longer an issue for Netflix’s own original programming, but unfortunately this is not the case.

Last week Netflix released the latest season of House of Cards, something millions of people were looking forward to. However, Netflix subscribers in dozens of countries are not able to watch it, yet, due to licensing issues.

House of Cards fans in Austria, Germany, Switzerland, Spain, Hong Kong, Turkey and most of Africa are among those missing out. They can watch the first seasons, but there’s no sign of the new episodes. Even worse, in some countries House of Cards isn’t available at all.

Needless to say, the missing House of Cards episodes are being met with a mixture of surprise and anger online. 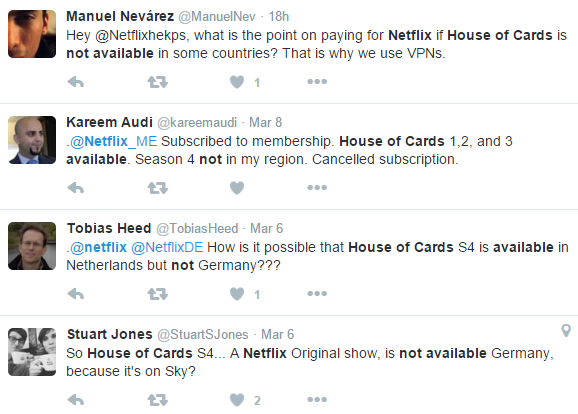 TorrentFreak reached out to Netflix for an explanation and we were informed that the company doesn’t have global licences for its drama series House of Cards and Orange Is The New Black. The latter series is entirely absent from Netflix in over 50 countries.

“Most of our originals content will be available globally. However, with these two earlier shows, we didn’t negotiate global licenses to the content and so they’ve aired on other platforms in the meantime,” the company states.

“We may get them back in some of our new markets. For example, we have Orange is the New Black available in our new countries in Asia, with the title coming to the Middle East and Africa later this year,” Netflix adds.

This situation is quite painful since Netflix has repeatedly called on the movie industry to offer its content globally, without artificial barriers. Apparently, they haven’t managed to do this for all of their own content yet.

According to Netflix CEO Reed Hastings the licensing issues are a legacy from the last seven or eight years, which they hope to get rid of in the near future.

“We’re moving as quickly as we can to have global availability of all the content on Netflix so that there are not regional distinctions. We’re still somewhat a prisoner of the current distribution architecture, we’re trying really hard to get there,” he said.

In the meantime, House of Card fans who live in the wrong country must hold their breath, although many are already looking for alternative means to get what they want…