Netflix Wants to Be a Great Carrot For ‘Real’ Pirates

Last week Netflix announced that it would increase its crackdown against VPN and proxy users who circumvent the company’s geographical restrictions.

In an earnings interview Netflix CEO reed Hastings commented on this decision, admitting that it was made at the behest of copyright holders.

While VPN providers and users have criticized the tougher restrictions, Netflix itself doesn’t expect that it will cause an exodus of paying subscribers.

“I don’t think we will see any impact,” Hastings said.

“We’ve always enforced proxy blocking with a blacklist. Now we’ve got an expanded and enhanced blacklist, so I don’t think we’re going to see any huge change,” he adds.

According to Hastings it’s perfectly reasonable for copyright holders to demand tougher action against VPN and proxy users. However, this use is only a small fraction of the ‘real’ piracy problem.

The real challenge is to convert those who use pirate sites and applications such as Popcorn Time. Netflix wants to be a carrot for these users which means that offering good content is high on the anti-piracy agenda.

“Overall global piracy is a big problem and we’re working with all the content owners, partially to be a great carrot, and also to have the other services like HBO and Amazon be great carrots,” Hastings said.

In a letter to the company’s shareholders Netflix notes that quite a bit of progress has been made in recent years.

Drawing on data from the broadband management company Sandvine, it shows that Netflix and other over‐the‐top services continue to grow their share of Internet peak traffic at the expense of BitTorrent. 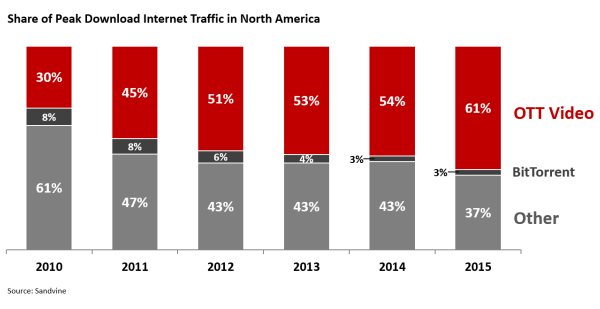 “A closer look at the Sandvine data shows that the entire Over‐the‐Top category is growing as consumers increasingly embrace Internet TV and on demand viewing and, even better, this growth is coming at the expense of piracy,” the letter reads.

While blocking VPN users may not reverse this trend right away, it certainly doesn’t make Netflix a more appealing carrot. In fact, it looks more like a stick to scare paying subscribers.

In the long-term the company hopes to make the entire geo-blocking discussion obsolete by offering movies and TV-shows worldwide. Netflix is already doing this for its own originals, but whether Hollywood will come along for the ride remains to be seen.