Every year copyright holders get the chance to hand over their list of anti-piracy recommendations for the U.S. Trade Representative’s Special 301 report.

The review is published annually and highlights countries that in the eyes of the U.S. are not doing enough to deter copyright infringement. Nintendo is one of the companies to submit recommendations on how other countries should tackle these issues.

The gaming company states that piracy is a chronic problem that results in “huge losses,” in part due to the inactivity of foreign countries who do very little to curb copyright infringement.

“In the past few years, the scope of online piracy for Nintendo has grown dramatically. Every month tens of thousands of illegal Nintendo game files are detected on the Internet. The legal environment to limit the flow of these files remains extremely challenging,” the company explains in its letter.

Like last year, Nintendo’s letter focuses on four countries – Brazil, China, Mexico and Spain – where these challenges remain unaddressed. For each of the countries the game company offers a set of recommendations on how the legal climate can be improved, hoping the United States Government will push for change.

According to statistics presented in the letter, no less than 16% of all online piracy of Nintendo products traces back to Spain. With 1.2 million downloads this is the second largest piracy market, just behind Italy with 1.4 million downloads.

Nintendo Piracy across the globe 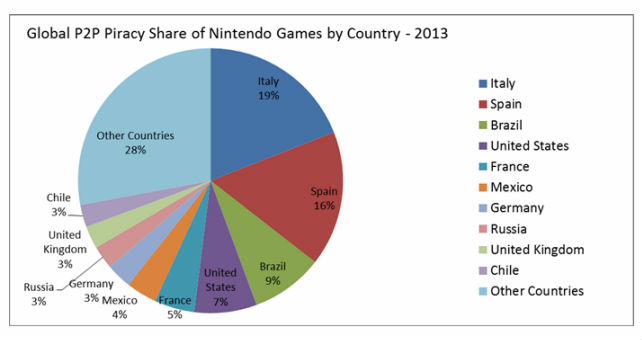 While the volume of piracy has deceased somewhat compared to previous years, Nintendo wants Spain to take drastic action. Specifically, it points out that the local Intellectual Property Committee (IPC) should block pirate sites wherever possible.

“Since so many illegal video games are downloaded in Spain from foreign-based cyberlockers, and accessed through cyberlinkers or P2P linking sites hosted outside Spain, the IPC must address this issue by authorizing the blocking of linking sites,” Nintendo writes.

The irony of this suggestion is that Nintendo has made no efforts in the United States to have any of the major torrent or linking sites blocked. This is especially painful because their own research shows that many of the larger Spanish linking sites are hosted in America, and registered though U.S. companies.

In addition to blocking websites, the game company wants the U.S. Government to educate and train the Spanish on how to deal with copyright infringers effectively.

“The Spanish Government should work with the U.S. Government and rights holders to provide necessary IP training to Spanish prosecutors, judges and IPC officials, particularly focusing on Internet piracy and effective online investigation, prosecution, and adjudication of criminal copyright infringement on the Internet.”

Similar recommendations are made for Mexico, Brazil and China. In these countries Nintendo also wants ISPs to be held liable for their role in continuing high levels of Internet piracy. The gaming company says that this can be achieved by introducing notice and takedown procedures as well as stiffer penalties for companies that fail to take responsibility.

Companies and individuals who continue to facilitate copyright infringement have to be prosecuted, Nintendo says, and to boost deterrence maximum penalties should be increased.

“Bring criminal prosecutions against major infringers, including those facilitating piracy on the Internet. The courts must impose stronger penalties against IP crimes, both traditional forms of piracy and online piracy, to raise awareness and foster deterrence,” Nintendo adds.

It is clear that Nintendo wants the U.S. to put more pressure on foreign countries, but whether these efforts will be successful has yet to be seen. In a few weeks the U.S. Trade Representative is expected to release its full Special 301 report.