In an interview with Computer and Video Games, Nintendo designer Shigeru Miyamoto says that his company is more concerned about piracy than the used games market, despite earning revenue from neither. 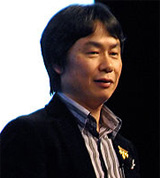 There can be no doubt that when it comes to video games Shigeru Miyamoto is nothing less than a legend.

The 60-year-old has some of history’s most iconic games and characters under his belt including Mario, Donkey Kong and Zelda. To some he is greatest game designer of all time.

Speaking at this week’s E3 gaming expo in Los Angeles, Miyamoto told CVG how his company views the illegal market versus the market for used games, neither of which produce revenue for Nintendo.

“For us it’s less about used games and it’s really more illegal copying of games that we’re really worried about. By creating the games that we create and selling those games, it enables us to then create new versions of those games,” Miyamoto said.

“We’re more worried about piracy and we think used games are a whole other story,” he continued.

“In fact, from our perspective you want to create a game that people will want to keep and keep playing for a long time. That’s the approach that we always take and that’s the best way to avoid used games.”

That’s the nail on the head right there.