At the start of 2012, New Zealand police embarked on what was almost certainly the most heavy-handed police action ever carried out against someone accused of copyright infringement.

At 06:45 on January 19 it soon became clear something unusual lay ahead.

Officers of the Special Tactics Group, New Zealand’s elite counter-terrorist force, had been sent to detain Megaupload founder Kim Dotcom following allegations in the United States that his company had breached the distribution rights of Hollywood studios.

No one in the household, including several maids and Dotcom’s pregnant wife and children, had any record of violence. Yet police arrived in force, swooped into the sprawling estate in vehicles, on foot, and in helicopters which landed on the forecourt of Dotcom’s house.

Security staff were detained, handcuffed and told to lie on the floor. Other staff, including Dotcom’s personal bodyguard, were placed next to a van containing barking dogs.

In August 2012, dramatic footage of the raid taken from police helicopters was published by New Zealand’s 3Newz. The video evidence showed that accounts from the day were true and overwhelming force had indeed been used.

Just a few moments ago Kim Dotcom released a new video of the raid, this time taken by his own network of internal security cameras. The detailed and clear images further highlight the resources allocated to detain the Megaupload founder and his family.

The video begins with Chris Dodd making his now-infamous threat to pull funding to President Obama if something isn’t done about online piracy. It then switches to the very next day and an aerial view of the Dotcom mansion as a police helicopter swoops in.

New footage begins when police clad in black are filmed running to the main gate of the property where they confront a security guard. He has his hands thrust behind his back and is walked quickly off camera.

After police vehicles and more officers enter the premises, one is seen moving across the front of the house with a dog on a leash. A car then pulls up in the driveway and an officer emerges, raising a rifle up to his shoulder.

In another section a second staff member is handcuffed while three armed officers walk off camera. 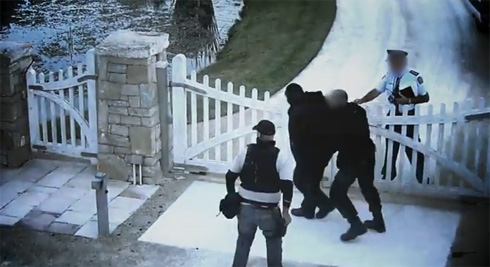 As police vehicles and even more officers pour onto the scene, armed anti-terror police – one with a dog on a leash – are seen trying to access Dotcom’s garages. As can be seen from the image below, at least one is pointing a handgun while the other brandishes a silenced rifle fitted with a scope. 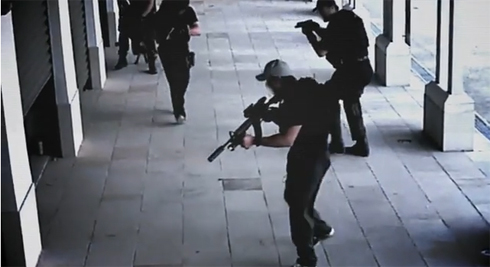 Once access had been gained, police already prepared with tow trucks begin removing Dotcom’s prized car collection, including the pink cadillac in the image below. 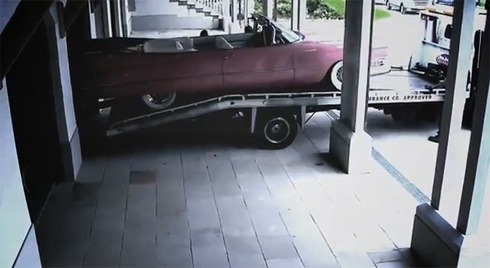 But despite all the resources and intelligence used, authorities still managed to mess up the raid. Last year the search warrants used were ruled overbroad and illegal by a High Court judge.

The newly released video ends with what appears to be Dotcom’s preferred conclusion to the police raids. Funny though it is, the similarities between the raid and the final events leading up to the scene in the movie portrayed are quite similar. In fact the entire raid is quite ‘Hollywood’, but perhaps that was the intention all along.