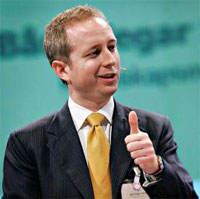 Earlier this week the music industry, headed by the IFPI, gave Norway’s largest Internet provider an ultimatum; block access to The Pirate Bay within 14 days or we will take you to court.

ISPs have criticized IFPI’s move, and Pirate Bay’s spokesman Peter Sunde said that “the crazy people behind IFPI should be stopped.” Bård Vegar Solhjell, Minister of Education and Research in Norway sides with Peter in this assessment, as he vouches for the legalization of file-sharing.

In a recent blog post, the minister who is a member of the Socialist Left Party (SV), said that file-sharing is genius, and a great way to discover and access music. “You and I can get access to all the world’s music when we want. Fantastic!” Solhjell wrote on his weblog.

The music industry should embrace the Internet instead of fighting it, according to the minister. “All previous technology advances have led to fears that the older format would die. But TV did not kill radio, the Web did not kill the book, and the download is not going to kill music,” Solhjell wrote.

The music industry fears new technologies according to Norway’s Minister of Education. He believes that if radio had been invented today the record labels would have tried to shut that down too. “But just as the radio and cassettes haven’t killed music, it is a preposterous claim to say that file-sharing does,” Solhjell told VG nett.

Instead of fighting file-sharing and the Internet, the industry should be looking for a system that works for consumers and artists. Spotify is one example according to the minister, who has put ‘legal file-sharing’ on the agenda of his party.

In their new party program they describe it as follows: “SV will explore the possibility of legalizing non-commercial file-sharing of music performed by private persons, in combination with a licensing solution for payment to the licensees,” and Solhjell believes that in the end, both consumers and artist will benefit from an open market.