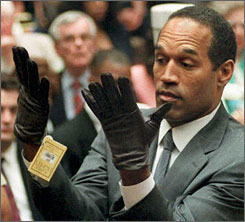 “If I Did It” is the title of an unreleased book by ex-NFL player and actor O.J Simpson where he gave a hypothetical account of what would’ve happened, had he committed the double knife-murder of his ex-wife Nicole Brown Simpson and her friend Ronald Goldman in 1994. According to reports, Simpson was paid $3.5m for writing the book.

The book begins, “I’m going to tell you a story you’ve never heard before, because no one knows this story the way I know it. It takes place on the night June 12, 1994, and it concerns the murder of my ex-wife, Nicole Brown Simpson, and her young friend, Ronald Goldman. I want you to forget everything you think you know about that night because I know the facts better than anyone. I know the players. I’ve seen the evidence. I’ve heard the theories. And, of course, I’ve read all the stories: That I did it. That I did it but I don’t know I did it. That I can no longer tell fact from fiction. That I wake up in the middle of the night, consumed by guilt, screaming.”

At the time, publisher Judith Regan said, “This is an historic case, and I consider this his confession.”

Announced in November 2006, the release of the book was cancelled after public outrage and disgust, resulting in the reported pulping of all-but-one of the 400,000 copies already manufactured. One last copy was reportedly kept under lock and key but another copy of the book turned up on eBay in January this year, and eventually sold for $65,000.

Now it appears that .torrents linking to digital copies of the book have turned up on mininova and The Pirate Bay and are undoubtedly set to re-ignite controversy surrounding the murders.

From the book, a small part of OJ’s description of the murders;

“I looked over at Goldman, and I was fuming. I guess he thought I was going to hit him, because he got into his little karate stance. “What the fuck is that?” I said. “You think you can take me with your karate shit?” He started circling me, bobbing and weaving, and if I hadn’t been so fucking angry I would have laughed in his face. “O.J., come on!” It was Charlie again, pleading. Nicole moaned, regaining consciousness. She stirred on the ground and opened her eyes and looked at me, but it didn’t seem like anything was registering. Charlie walked over and planted himself in front of me blocking my view. “We are fucking done here, man-let’s go!”

The 118-page release is in .PDF format and appears to be complete and as described.