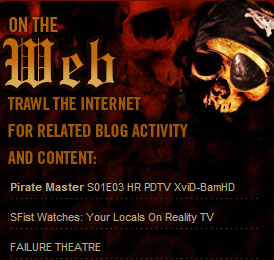 The image on the right is shown on the bottom right of the “Pirate Master” (what’s in a name) homepage. It is supposed to list news from blogs and other web-resources that write about the show. However, it also shows links to .torrent files on sites like Mininova, ShareTV, bitDig, and even private BitTorrent trackers like Torrentleech.

It is not very likely that CBS is linking to the .torrent files on purpose, they probably use a RSS feed aggregator that includes these BitTorrent sites.

On the other hand, a few months ago CBS’s chief research officer David Poltrack expressed his sympathy for BitTorrent when a CBS poll showed that people who download TV shows actually watch more TV. In a response to the poll Poltrack (what’s in a name) said that online distribution services like YouTube and BitTorrent are friends, not foes.

At the time Poltrack said that he doesn’t believe in paid services. Instead, he sees a future for free TV on the Internet, supported via ad-supported business models. In a panel discussion at the Future of Television Forum Poltrack said that “if [consumers] are going to steal it, give it to them anyway. But also make it easier to access and present it better than YouTube or BitTorrent or anywhere else.”

What better way to present it than to link to the .torrent files on the homepage of the TV-show?