Copyright holders know that one of the most effective ways to hinder a file-sharing site is to attack its domain. As a result, various strategies have emerged to deprive owners of their use.

Those methods range from a basic complaint to registrars over incomplete or inaccurate WHOIS entries, to the more complex seizing of domains via the legal system.

The amount of time spent on enforcement is often comparable with the quality of the end results. WHOIS information is quickly fixed but domains ordered seized by a judge tend to stay that way forever.

Interestingly, a situation now faced by a leading file-hosting site might lie somewhere in the middle.

Openload is one of the most-used file-hosting platforms on the Internet, with more traffic than 4shared, Rapidgator and Uploaded. It has a worldwide Alexa rank of 402 and millions of visitors every week but yesterday a wrench was thrown into the works.

Around 18:22 Monday, Openload’s .co domain was suspended by its registrar Namecheap. As can be seen in the entry below, the reason is reported as “abuse”. 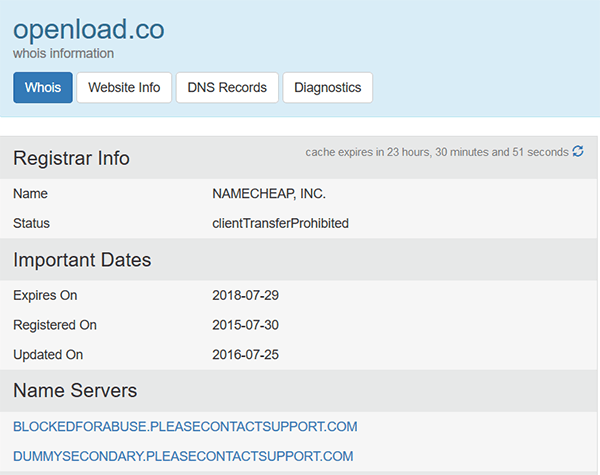 Namecheap passed our request for comment to its legal department who have yet to formally respond. However, we were able to contact the operator of Openload who confirmed that there had been an alleged breach of Namecheap’s Terms of Service.

“Namecheap suspended our domain for abuse according to their TOS,” Openload’s operator told TF. “Basically, they just said that they received too many DMCA reports.”

It is fairly unusual for a domain registrar to be targeted with so many copyright complaints since they are traditionally directed at the site itself, its webhost, or both. In this case, however, Namecheap appears to have been overwhelmed.

To get an idea of potential scale, in less than a year Google has received in excess of 450,000 DMCA complaints against Openload’s .co and .io domains.

The range of entertainment companies involved is broad, from the RIAA, Netflix and Warner Bros, to various Japanese anime distributors. Indeed, a large proportion of Openload’s traffic hails from Japan.

That being said, Openload says it is DMCA-compliant and processes complaints in a timely fashion.

“[The complaints received by Namecheap] were of course all taken down within 6-24 hours, but the number of notices is too much for them,” the site told us.

Copyright holders do have other options though. In addition to inviting complaints via a standard web form, Openload also offers a takedown tool.

“Openload is anxious to optimize the process of taking down files that violate copyright. Therefore Openload is offering a takedown API,” the site says.

But while takedowns are important, Openload does have a feature that tends to irritate copyright holders – paying uploaders for the amount of downloads they generate.

“We pay a fixed amount per 10,000 downloads/streams. Each payment amount per download/stream depends on the country the actions comes from,” the site explains on its rewards page.

Of course, YouTube also pays uploaders for the amount of traffic they generate but copyright holders have traditionally drawn a line in the sand when the same is offered by Openload-type hosting sites. The U.S. Department of Justice indictment against Megaupload famously paints a loosely similar scheme in a very dim light.

For now, Openload has lost control of its main Openload.co domain but the site is back up and running at Oload.co, a domain that was purchased last night following Namecheap’s suspension.

“Our site is reachable via oload.co which is actually a kind of read-only site. All features will return on the new domain during the next hours,” Openload’s operator concludes.

Update: Openload’s original domain suspension has been lifted by Namecheap. The company is yet to respond to our request for comment.

Update 2: Noting that Namecheap previously opposed SOPA, a customer has questioned the registrar on Facebook about the Openload suspension.

“Openload is now back,” Namecheap said in response. “We acknowledge that our legal team was too heavy handed in this case, and we’ve taken steps internally to ensure that this won’t happen again. As long as they respond to DMCA complaints within required time frames, they should be ok going forward.”

Openload and Streamango Shut Down by Anti-Piracy Alliance ACE (Updated)

As RIAA Targets Yet More YouTube-Ripping Sites, Here’s the State of Play