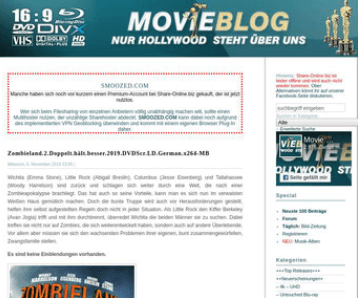 Local anti-piracy outfit GVU noted that this was the first time that the operators of a file-hosting platform had been targeted in a criminal procedure.

In November 2020, TorrentFreak learned that global anti-piracy coalition Alliance for Creativity and Entertainment (ACE) had obtained DMCA subpoenas in the United States compelling the Tonic domain registry to hand over whatever information it held on around two dozen ‘pirate’ sites.

The list included ddl-warez.to, boerse.to and movie-blog.to, which had all been previously linked to Share-Online by GVU. Earlier this week, TorrentFreak learned that several domains operated by Movie-Blog (movie-blog.org, movie-blog.sx and movie-blog.tv) had begun redirecting to the ACE anti-piracy portal, a clear sign that nothing good had come of the platform.

ACE now provides information explaining why they are in control of the domains and what led to their seizure.

ACE, which represents the interests of dozens of major content companies (including the studios of the MPA), says a criminal investigation into Movie-Blog took place, leading to substantial law enforcement action. The site was pulling in an estimated 65 million visitors per year, so was a fairly successful operation.

Two individuals were eventually charged by the public prosecutor with massive copyright infringement. This led to their conviction last month at the Aurich District Court, with the criminal proceedings spported by ACE throughout the trial.

“On February 25, the Aurich Court convicted the two operators to a delayed 22-month imprisonment sentence for commercial unlawful exploitation of copyrighted works. Both must also pay fines and all seized equipment will be destroyed,” an ACE statement reads.

A delayed or suspended sentence means that those convicted will not necessarily see the inside of a prison cell unless other aggravating factors come into play, such as new or repeat offending.

“We applaud law enforcement’s efforts to have this case brought to court as well as the conviction achieved today by the public prosecutor,” says Jan van Voorn, Executive Vice President and Chief of Global Content Protection for the MPA, referencing the sentencing back in February.

“As ACE continues to fight piracy by working with a strong network of global allies, we are grateful to our partners in Germany for creating a solid deterrent effect in the market. The dedication of resources to fight IP infringement supports jobs in the audiovisual sector and bolsters the local creative economy as well.”

Given that ACE visibly targeted the Tonic-controlled movie-blog.to domain last year, it’s of interest that unlike the other variants, it doesn’t yet appear to be under the anti-piracy group’s control.

Indeed, the domain is currently being offered for sale by GoDaddy, prices on application.