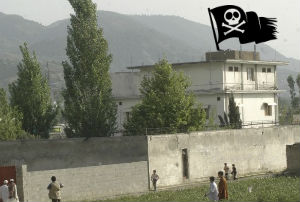 The times when pirates were stereotyped as young men in a college dorm are long past us.

Nowadays you can find copyright infringers throughout many cultures and all layers of society.

In the past we’ve discovered ‘pirates’ in the most unusual places, from the FBI, through major record labels and the U.S. Government to the Vatican.

This week we can add another location to the list, Osama Bin Laden’s former Abbottabad compound, where he was captured and killed on 2 May 2011.

The CIA has regularly released documents and information found on the premises. This week it added a massive treasure trove of 470,000 files, providing insight into the interests of one of the most notorious characters in recent history.

“Today’s release of recovered al-Qa‘ida letters, videos, audio files and other materials provides the opportunity for the American people to gain further insights into the plans and workings of this terrorist organization,” CIA Director Pompeo commented.

What caught our eye, however, is the material that the CIA chose not to release. This includes a host of pirated files, some more relevant than others.

For example, the computers contained pirated copies of the movies Antz, Batman Gotham Knight, Cars, Chicken Little, Ice Age: Dawn of the Dinosaurs, Home on the Range and The Three Musketeers. Since these are children-oriented titles, it’s likely they served as entertainment for the kids living in the compound.

Gizmodo has an overview of some of the weirdest movies, for those who are interested.

Not all content is irrelevant, though. The archive also contains files including the documentary “Where in the World is Osama bin Laden,” “CNN Presents: World’s Most Wanted,” “In the Footsteps of Bin Laden,” and “National Geographic: World’s Worst Venom.”

Or what about “National Geographic: Kung Fu Killers,” which reveals the ten deadliest Kung Fu weapons of all time, including miniature swords disguised as tobacco pipes.

There is, of course, no evidence that Osama Bin Laden watched any of these titles. Just as there’s no proof that he played any games. There were a lot of people in the compound and, while it makes for a good headline, the files are not directly tied to him.

That said, the claim that piracy supports terrorism suddenly gets a whole new meaning…