Google regularly removes infringing websites from its search results, but the company is also wary of abuse.

When the Canadian company Equustek Solutions requested the company to remove websites that offered unlawful and competing products, it refused to do so globally.

This resulted in a legal battle that came to a climax in June, when the Supreme Court of Canada ordered Google to remove a company’s websites from its search results. Not just in Canada, but all over the world.

With options to appeal exhausted in Canada, Google took the case to a federal court in the US. The search engine requested an injunction to disarm the Canadian order, arguing that a worldwide blocking order violates the First Amendment.

Surprisingly, Equustek decided not to defend itself and without opposition, a California District Court sided with Google yesterday.

During a hearing, Google attorney Margaret Caruso stressed that it should not be possible for foreign countries to implement measures that run contrary to core values of the United States.

The search engine argued that the Canadian order violated Section 230 of the Communications Decency Act, which immunizes Internet services from liability for content created by third parties. With this law, Congress specifically chose not to deter harmful online speech by imposing liability on Internet services.

In an order, signed shortly after the hearing, District Judge Edward Davila concludes that Google qualifies for Section 230 immunity in this case. As such, he rules that the Canadian Supreme Court’s global blocking order goes too far.

“Google is harmed because the Canadian order restricts activity that Section 230 protects. In addition, the balance of equities favors Google because the injunction would deprive it of the benefits of U.S. federal law,” Davila writes.

Rendering the order unenforceable is not just in the interest of Google, the District Court writes. It’s also best for the general public as free speech is clearly at stake here.

“Congress recognized that free speech on the internet would be severely restricted if websites were to face tort liability for hosting user-generated content. It responded by enacting Section 230, which grants broad immunity to online intermediaries,” Judge Davila writes. 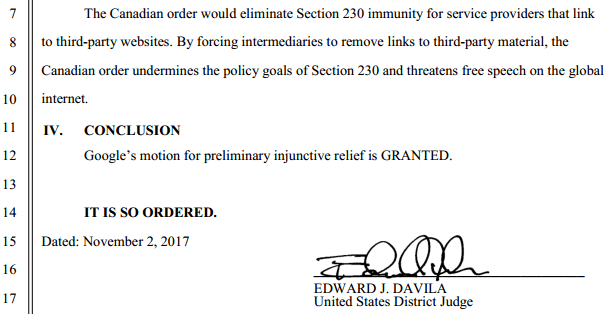 The Court signed a preliminary injunction which prevents Equustek enforcing the Canadian order in the United States, which is exactly what Google was after. Since the Canadian company chose not to represent itself in the US case, this will likely stand.

The ruling is important in the broader scheme. If foreign courts are allowed to grant worldwide blockades, free speech could be severely hampered. Today it’s a relatively unknown Canadian company, but what if the Chinese Government asked Google to block the websites of VPN providers?

A copy of the full order is available here (pdf).