While Hollywood would’ve liked it to remain a secret, news that the majority of Oscar contenders were available online just a day after the Academy’s announcement traveled fast.

In anticipation of this eventuality, at the turn of the year piracy monitoring firm Irdeto began tracking dozens of top movies in order to compare the number of downloads before and after the Oscar nominations were made public. Some of the numbers just revealed by the company are eye-watering.

After monitoring from January 1 through February 14, Irdeto found that there was a 385% increase in piracy of nominated films following the Academy’s announcement on January 15.

“While Gone Girl was the early frontrunner after nominations, American Sniper took the lead and is currently the most pirated film in the world post-nomination,” Irdeto reveals.

As the chart below shows, the majority of nominees had download numbers boosted between 161% and 230%, but clearly out in front is Selma with a 1033% uplift. 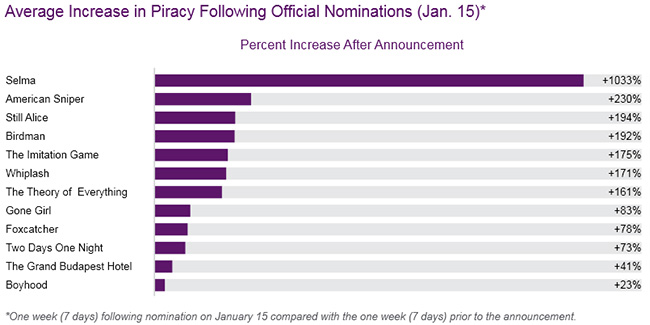 In terms of pure downloads, however, the Martin Luther King movie isn’t an Oscar high-flyer. Despite the huge boost in interest after nomination day, Selma sits in 10th place well behind piracy leaders American Sniper and Gone Girl.

Of course, the big question now is whether popularity on BitTorrent networks will be mirrored in the final Oscars ceremony. Ranking movies based on downloads since January 15 in the categories they were nominated, Irdeto predicts the winners as follows:

Hollywood’s own leaks contributed to the piracy problem

While the Oscar-nominated movies now available online come from a wide variety of sources including Blu-ray, DVD (34% combined) and Cams (11%), Irdeto’s study highlights the problems the Academy has with its own leaks. Handed out to voters, critics and others in the industry, screeners are the most prized source for online booty. And this year there were plenty of them.

“Hollywood screeners specifically accounted for a substantial 31% of the total illegal downloads tracked between January 15 and February 14,” Irdeto reveals.

While noting that not every download is a lost sale, the anti-piracy company still believes that an estimated $40m could have been lost on these titles alone, simply because they weren’t made available legally to consumers.

“Our data clearly shows that the rest of the world is paying attention to the Academy Awards and there is significant demand for new movies to be available earlier, in more geographies and over more platforms,” says Rory O’Connor, VP of Managed Services at Irdeto.

“In the world of internet re-distribution, the window between theatrical release and worldwide market availability may simply be too long, leaving room for pirates to take advantage and offer consumers alternative means of instant gratification. Today’s consumers simply refuse to wait to access these movies through legitimate services.”

The rest of the world

Finally, outside of the United States the top ten countries accounting for the most illegal downloads were Russia, Italy, UK, Brazil, Canada, India, Australia, Spain, South Korea and the Netherlands.

And in what is bound to be yet more ammunition for the copyright lobby Down Under, the Oscar for the country with the highest percentage of piracy per Internet user population goes to….